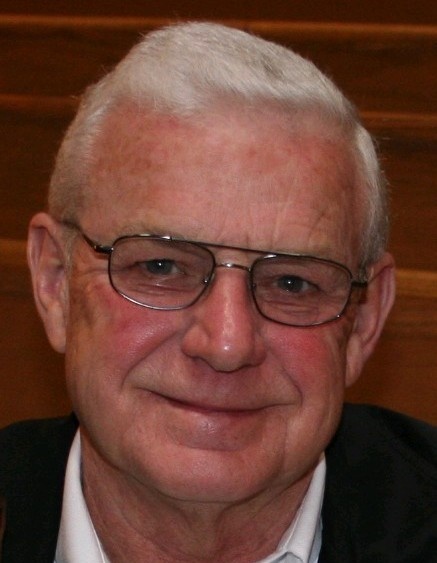 He was born April 5, 1942, in Los Angeles, Calif., to Gordon and Hope (Drummond) Gatzemeyer. He married Lina Schademann in 1964. He later married Norma Kelly in 1987. She preceded him in death on July 7, 2010. He also was preceded in death by his parents and one sister, Susan.

A.J. was employed as a Mechanical Engineer and worked at Caterpillar Inc. for 38 years before retiring in 2001. His last position was Manager of Engine Development at the Technical Center.

Our dad wrote his obituary several years ago, and true to his nature it is factual and brief, but we know that he was so much more.

He loved his morning coffee and the daily crossword puzzle in the paper. He was an avid reader of all kinds of books, but had a special interest in World War II history.  He also enjoyed watching Great Courses on DVD and would have the Morton librarian locate different series for him all over the country. He collected crime stories from the Peoria Journal Star of not-so-smart criminals and kept them in several scrapbooks.

He attended Roth Auction regularly for over 20 years, and was always bidder #39.  He developed friendships there and would bid on 'treasures' as he liked to call them. He loved a bargain and was known to engage in the occasional dumpster diving when it meant finding a good piece of hardwood for the wood shop!

He enjoyed playing cards, especially cribbage and having pizza & ONE beer.

He had a garden where he grew cucumbers and tomatoes and gave away most of them to family, neighbors and friends. After that it was pickles and pickles and more pickles - sour ones, sweet ones, red hot pepper ones.

Dad had a passion for woodworking.  He belonged to Peoria Area Woodworkers Club where he presented many of his projects and last year won the 'Mousetrap Car' challenge - of course, no one had a chance against him as he researched, plotted and strategized. He loved making wood & glass projects. Over the years he made rocking horses, baby rockers, clocks, pencil boxes, banks, boxes, lamps, sun catchers, kids table and chairs, trains and cars and even the stairs in one of our homes. He donated little cars and trains to a local pediatrician to give kids.

Dad loved taking things apart, redesigning it better and putting it back together. In recent years, he began collecting classic cars that he still had to modify to 'make them better'. His brother Dwight was frequently his partner in crime with any project of a mechanical nature.  They were always working on something.

He had a couple of sayings such as, 'do a good job, and the money will follow' and ‘having your health is everything.’ He loved his church and attended rain or shine or even COVID. He was very generous with his kids and our mom when he didn't have to be.

One of Dad’s legacy goals was to be able to start a scholarship at the University of Nebraska College of Engineering. When he was a young engineering student, he had gone to the Dean of the school to ask for financial help because he couldn't pay for all the classes he needed.  The Dean had a fund available to assist students like Dad to make it through school. He never forgot what a help that was for him, and so he created a scholarship a number of years ago within the College of Engineering for other students like him.

AJ was our trusted advisor, mentor and counselor. He was a wonderful father whom we love and will miss greatly.

He was a member of Blessed Sacrament Catholic Church in Morton, where a Memorial Mass will be held at 10 a.m. on Saturday, January 9, 2021, with Msgr. Gerald Ward officiating. Social distancing guidelines will be observed during the Mass and masks are required. Entombment will be in Resurrection Mausoleum in Peoria.

To send flowers to the family in memory of A.J. Gatzemeyer, please visit our flower store.
Send a Sympathy Card