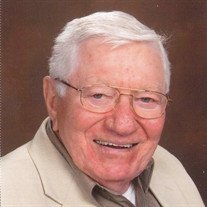 ANDREW J.J. MOORE, SR.
MACKINAW - Andrew John Jackson Moore, Sr., 87, of Mackinaw, passed away peacefully, Sunday, April 16, 2017, surrounded by his family at his residence.
Andrew was born Feb. 10, 1930 to Andrew and Alpha (Dodson) Moore in Tupelo, Ark. He married Cleta Ruth Herman on April 14, 1951 in Peoria. She preceded Andrew in death on Feb. 23, 2017.
Andrew was also preceded in death by his son, Michael Moore, Sr., four sisters, an infant grandchild and two infant great-grandchildren.
Surviving are three sons, Dayton (Robin) Moore of Mackinaw, Andrew (Becky) Moore, Jr. of Peoria, and Bruce (Laura) Moore of Creve Coeur. He is also survived by 13 grandchildren and 16 great-grandchildren.
He and his wife owned and operated Dairy Queen on Sheridan Road in Peoria for 10 years. They later owned and operated Cleta's Kitchen in Minonk for 12 years, retiring in 1997.
He and his wife enjoyed camping and spending winters in Texas for many years.
Andrew was a member of Glad Tidings Assembly of God church in East Peoria.

A memorial gathering will be held at Glad Tidings Assembly of God in East Peoria on Thursday, April 20, 2017 from 4 to 6 p.m. A graveside service will be held Friday, April 21, at 11 a.m. in the chapel at Swan Lake Memory Gardens in Peoria. His nephew, Rev. Tom Jones will officiate.

Memorials may be made to Glad Tidings Assembly of God in East Peoria.

To send flowers to the family in memory of Andrew John Jackson Moore, please visit our flower store.
Send a Sympathy Card