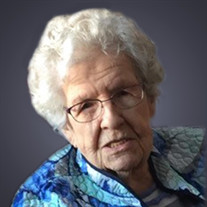 BETTY WOELFEL
EUREKA - Betty D. Woelfel, 96, of Eureka, passed away Friday, March 16, 2018, at Advocate Eureka Hospital in Eureka. Betty was born March 22, 1921, in Mason City, Ill., to Ray and Katherine (Vail) Harris. She married Oliver Wittfoht on July 27, 1940, in Burlington, Iowa. He preceded her in death on March 9, 1992. She then later married Donald Woelfel on June 26, 1993, in Greenwood, Ind. He preceded her in death on Aug. 28, 2013. She was also preceded in death by one infant granddaughter, Erin Michelle and sister and brother-in-law, Dorothy "Jean" and Ray Gorman.
Surviving are her daughters, Delores (Pat) King of Peoria and Donna Benson of Morton; two stepsons, Jim (Dinah) Woelfel of Brookville, Ohio and Tom Woelfel of Indianapolis, Ind.; two stepdaughters, Joyce Woelfel of Lexington, Kent. And Janet Murray of Indianapolis, Ind.; four grandchildren, Kelly (Steve) Shaw of Morton, Michael (Cathy) King of Morton, Stephanie Benson of Hopedale and Michelle (Bill) Switzer of Metamora; six great grandchildren, Katie Shaw, Michael King, Dustin Osborn, Ashley Benson, Nicholas Springer, and Madison Benson; eight step grandchildren; eight step great-grandchildren; and two nieces, Kathy (Jim) Yocum of Peoria and Margie Rosenberger of Plano, Ill.
Betty worked for over 30 years at Caterpillar, Inc. in the administration building in Peoria. She retired in 1980, as a supervisor in the tax department.

A funeral Mass will be held at 11 a.m. on Tuesday, March 20, 2018, at Blessed Sacrament Catholic Church in Morton, with a visitation held one hour prior to the service. Msgr. Gerald Ward will officiate. Burial will be in Roberts Cemetery in Morton.

Memorials may be made to St. Jude Runners Association and American Heart Association.


The family would like to express their appreciation for the care that their mother received at Eureka Apostolic Christian Home and Advocate Eureka Hospital.

To send flowers to the family in memory of Betty Woelfel, please visit our flower store.
Send a Sympathy Card