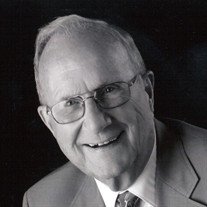 CARL J. VOGELSANG
MORTON - Carl J. Vogelsang, 92, of Morton, returned to his creator after a brief illness, Thurs., May 25, 2017, at his residence.
Carl was born Nov. 25, 1924 to Carl J. and Ruth (Peterson) Vogelsang in Burlington, Iowa. He married Marilyn Beverly Hennemann in 1945. To that union was born Kieth Alan, Susan Mahala, and Carl J. IIl. In 1974, he married Margaret Coburn-DeFrees, and her children, James "Jay" Steven and Diane Margaret.
He was preceded in death by his parents; one sister, Delores Werner; his eldest son, Kieth; and a nephew, "Bud" Werner.
Those who remain to grieve their loss are his wife, Margaret of Morton; two sons, Carl (Robynne) Vogelsang of Eugene, Ore., and Jay (Wendy) DeFrees of Morton; two daughters, Susan (David) Gubernick of Eugene, Ore., and Diane (Brian) Majors of Morton. Additionally, nine grandchildren, Mark of Albuquerque, N.M., Jason of Atlanta, Ga., Trina and Anton of Eugene, Ore., Colin, Justin, Katie, Andrew, and Sarah of Morton; one great-grandson, Tate of Eugene, Ore., and one niece, Jude Werner of Burlington, Iowa.
Like many boys of the depression era, he had little supervision growing up and yet developed an unshakable sense of ethical behavior, honesty, and responsibility.
After Pearl Harbor, he volunteered for the draft. He was approached by the Navy, but responded, "Heck no, I don't even know how to swim." Eventually, he joined the Army Air Corps, and was trained as a Medic in the Air Evacuation Unit based in Presidio, Calif. We considered him a hero and extraordinarily brave when we were told the plane never carried parachutes; "If our patients go down, we go with them."
After the war, he worked for Witte Paint Company where he learned his painting, wall papering, and decorating skills. In the 1950's, he was transferred to Miles City, Mont., where for entertainment, he drove a 1937 Willy's Knight stock car. He was quite successful in the local area until the vehicle was demolished in a crash in which he rolled the car seven times. When asked how he had the presence of mind to count the number of revolutions, he replied, "there wasn't much else to do in Miles City, Mont."
Around 1960, he was transferred to Central Illinois and moved to Morton, Ill. He grew tired of traveling sales and became a representative of Metropolitan Insurance Company and drove a school bus part-time for Morton School District 709. He later resigned from Metropolitan and became Supervisor of Transportation for the school district from 1976 to 1989. During his tenure, he unsuccessfully lobbied for all-day kindergarten; he was pleased to see that concept being adopted all over the state. Because of his deep affection for the children, and their parents, he continued to drive a school bus for special needs children until 2009. Until his death, he continued to meet adults who were delighted to report that he had driven them to school. Always, they had stories of their experiences and remembered his quick wit and "coolness." After retirement, he and Margaret wintered in Ariz.
Cremation rites have been accorded.

Memorials may be made to Wounded Warriors Project, or to Meal Train of First Mennonite Church.

To send flowers to the family in memory of Carl J. Vogelsang, please visit our flower store.
Send a Sympathy Card