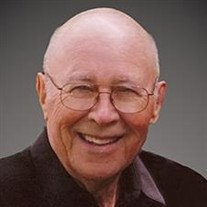 MORTON - Charles R. "Bob" Van Dyke, 96, of Morton, passed away on Tuesday, October 22, 2019, at Villas of Holly Brook in Pekin.
Bob was born on July 31, 1923, in Cooksville, Ill., to Charles Roy and Mildred (Fossett) Van Dyke. He married Mary Taylor on October 6, 1946, in Los Angeles, Calif. They recently celebrated their 75th Anniversary. She survives.
Also surviving are his children, Bruce Van Dyke of Pekin, and Tamela (Curt) Gleichman of Bartonville; four grandchildren, Eric (Cassie) Teddy of Arlington, Texas, Ryan (Angelica) Van Dyke of Naperville, Ill., Amy (Quinn) Headington of Mooresville, N.C., and Amanda Van Dyke of Manito; seven great-grandchildren; and two siblings, Frank (Micki) Van Dyke of Atlanta, Ga., and Donna Fogal of Chicago.
He was preceded in death by one daughter, Nancy; and two siblings, Lois Wilson and Gordon Van Dyke.
Bob was in the US Army from March 8, 1943 to February 6, 1946. He served in WWII and spent two years in the European Theater, receiving the Bronze Star medal, among others.
He attended Illinois State University from 1946-1950. He taught at Octavia High School and then worked for Shell Oil Co. from 1952-1982. After retirement, he enjoyed traveling in his RV.
Bob was a member of the American Legion and Shriners.
A funeral service will be held at 11 a.m. on Saturday, October 26, 2019, at Knapp-Johnson Funeral Home and Cremation Center in Morton, with Pastor Gary Salm officiating. Visitation will be from 10 to 11 a.m., prior to the service, at the funeral home. Burial will be at Hillcrest Memory Gardens in Morton.
Memorials may be made to Shriner's Hospitals for Children, P.O. Box 1525, Ranson, WV 25438.

To send flowers to the family in memory of Charles R. "Bob" Van Dyke, please visit our flower store.
Send a Sympathy Card