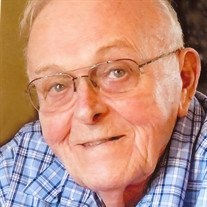 Charles "Charlie" Hewitt III, 83, of Morton, passed away Friday, October 11, 2019, at OSF St. Francis Medical Center in Peoria.
Charlie was born at home in rural Paris, Ill., on September 8, 1936, to Charles Jr. and Elizabeth (Walls) Hewitt. His family moved to Morton, Ill. in the 1950's, where Charlie attended and graduated from Morton High School with the class of 1954.
Charlie worked at Caterpillar after graduation for three years before being laid off. He returned to Paris, Ill., to work. It was here he met and then married Donna Caroline Cusick on November 2, 1958. She preceded him in death in 2004. Also preceding him in death were his parents; one son, Charles Hewitt IV; and one grandson, Corey Hewitt.
Charlie was career United States Army serving from June 1958 and retiring in June 1978. He served two tours in Vietnam. After completing his military career, he worked at Lockheed Missile & Space in California. He retired a second time after 13 years of working at Lockheed and then moved to Hollister, Mo. near Branson.
After retiring, he worked four summers at the Charlie Pride Theater in Branson for fun and to stay busy/socialize. He also enjoyed drinking coffee, driving, traveling, bowling, nature and animals. Charlie especially loved dogs.
While visiting in Morton from Missouri to attend his 50th Morton High School class reunion, Charlie contacted a special friend from his high school days to meet for coffee. They met. They reminisced. They married. Shirley Wagler Anderson-Hewitt. She survives.
Surviving are his children, Becky (Ray) Sawyer of Missouri, Joe (Ann) Hewitt of Wisconsin and Tamara (Michael) LeValley of California; seven grandchildren, Johnny, Donna, Samantha, Rachel, Rae Lynn, Bryan and Jared; six great grandchildren, Clifford, Jaxson, Connor, Ally, Anna and Andi; his step-children, Kimberle (Steve)Norvill and Scott (Jana) Anderson, both of East Peoria, Ill.; eight step-grandchildren, Cydney, Landon, Elliott, Hannah, Haeleigh, Delaney, Gia and Easton. He is also survived by his siblings, Mickey (Katie) Hewitt of Florida, Anna (Gary) Collier of Paris, Illinois; and nieces and nephews. Carrie Engel Anderson was also an important part of Charlie's life.
A funeral service will be held at 1 p.m. on Thursday, October 17, 2019, at Knapp-Johnson Funeral Home and Cremation Center in Morton. Visitation will be from 12 - 1 p.m. on Thursday, prior to the service at the funeral home. Burial will be at Hillcrest Memory Gardens in Morton.
The family would like to extend their sincere appreciation to the doctors, nurses and staff at OSF St. Francis Medical Center for the compassionate care given to Charlie.
Memorials may be made to Crittenton Crisis Nursery or T.A.P.S. Animal Shelter of Pekin.
Online condolences may be left for the family at www.knappjohnson.com.

To send flowers to the family in memory of Charles "Charlie" Hewitt III, please visit our flower store.
Send a Sympathy Card