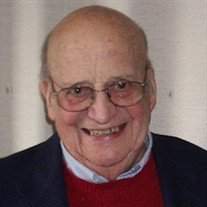 MORTON - Clifford M. "Cliff" Hasselbacher, 95, of Morton passed away Friday, December 14, 2018, at OSF Richard L. Owens Hospice Home in Peoria.
Clifford was born July 4, 1923, in Brimfield, Ill., to David and Maude (Shane) Hasselbacher. He married Betty Howe on June 10, 1951, in Brimfield, Ill. She preceded him in death on December 14, 2013. He was also preceded in death by one son William and three brothers, Carl, Edwin and Willard.
Surviving are one son, Tom (Jeanie Dennis) Hasselbacher of Williamsburg, Va.; one daughter, Susan (John) Farrell of Springfield, Ill.; five grandchildren, Stacy (Moises) Hasselbacher-Hernandez, Stephanie Hasselbacher-Berryhill (Jamie Berryhilll), Catherine Farrell, William Farrell and Debra Hasselbacher ; one great grandchild, Henry Berryhill; one daughter-in-law, Cheryl Sanfilip of Peoria; one brother, Roland (De) Hasselbacher; one sister-in-law, Louise Hasselbacher; two brothers-in-law, Gary (Deb) Howe and Steve Howe; and many nieces and nephews.
Cliff graduated from Brimfield High School in 1941. He then entered into the United States Army in 1943. Cliff served in Europe and also was at the Battle of the Bulge. He was honorably discharged from the Army in 1946. Upon leaving the Army, he enrolled at Bradley University and graduated in 3 years with a degree in business in 1949.
After graduation, Cliff accepted a job at Brimfield State Bank. He worked there until 1961 and then moved his career to Morton Community Bank becoming the first employee hired at the new bank. He spent the rest of his career working at Morton Community Bank in numerous positions and was also a member of the bank's Board of Directors. After a long and successful career, Cliff last worked in 2015.
Cliff was involved in numerous activities and clubs throughout his life dedicating his time and effort wherever he could. He was a member of the Kiwanis Club and Morton Rotary. He was the Rotary President from 1987-1988.
Cliff volunteered with the St. Jude Telethon and served on the board for Easter Seals.
He was honored with the Morton Chamber of Commerce Distinguished Service Award in 1985.
Cliff volunteered his time for years at the Morton Pumpkin Festival and was the festival parade Grand Marshal in 2008.
He was a member of both the Morton VFW Post 5921 and the Morton American Legion Post 318.
He spent much of his life singing and participating with the Pekin Barber Shop Chorus.
Cliff was an avid fan of the Chicago Cubs and Bears. He was also a loyal Bradley University Athletics supporter and booster. He served as the Bradley Alumni Association Central Illinois Chapter President from 1987-1988 and was the alumni's national president from 1997-1998.
A funeral service will be held at 10:30 a.m. Wednesday, December 19, 2018, at Community United Church of Christ in Morton, with Rev. Leah Kabira officiating. Visitation will be from 4 to 6 p.m., Tuesday, December 18, 2018, at Knapp-Johnson Funeral Home and Cremation Center in Morton. Further visitation will be from 9:30 to 10:15 a.m. Wednesday, December 19, at the church. Burial will be at Roberts Cemetery in Morton where military rites will be conducted by the United States Army and the Tazewell Military Rites Team.
Memorials may be made to Morton Community United Church of Christ or the St. Jude Runner's Association.
To view Clifford's video tribute or to leave the family an online condolence, visit www.knappjohnson.com.

To send flowers to the family in memory of Clifford M. Hasselbacher, please visit our flower store.