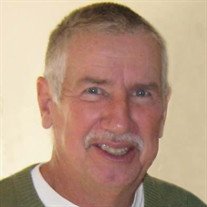 DARELL R. SWANSON
MORTON - Darell Ray Swanson, 69, of Morton, passed away on Fri., Aug. 11, 2017, at 12:10 a.m., at his home after a courageous battle with pancreatic cancer. Darell was born Jan. 11, 1948, in Peoria to Delbert and Shirley (Sherman) Swanson. He married Paula Kuchmuk on April 1, 1972.
Darell is survived by his wife of 45 years, Paula Swanson; his mother, Shirley Swanson; one son, Nick (Kristen) D'Alfonso; and two grandchildren, Will and Amelia, all of Morton. He is also survived by one brother, Fred Swanson of Chicago, and several nieces and nephews.
Darell was preceded in death by his father Delbert Swanson, his brother Doug Swanson, and sister Marge Tegard.
Darell graduated from Christ Lutheran grade school and Manual High School. Darell was a proud veteran, having served as a medic in the Vietnam War for 2 Â½ years. He spent 37 years as a carrier for the U.S. Post Office, retiring in 2003.
Darell attended First Federated Church in Peoria. He coached little league and pony league in Peoria for 25 years, and also umpired baseball for ten years. Darell cherished the opportunity to coach his grandson, Will, alongside his son, Nick, during the summer of 2016.
He enjoyed bowling and golfing and was a member of the Dew Dusters golf league. Darell loved spending time with his grandchildren and cherished time spent with Paula and their son, Nick. He had a tremendously optimistic outlook on life, and always remained positive throughout his illness.

There will be no public visitation or service. Private graveside service for the family will take place at Hirstein Cemetery in Morton.
Knapp-Johnson Funeral Home and Cremation Center in Morton is handling arrangements.

Memorials may be made to The Morton Youth Baseball Association or TAPS.

The family would like to thank Dr. Veeder and the staff at Illinois Cancer Center, as well as OSF Hospice for their tremendous compassion and care during Darell's illness.
To send flowers to the family in memory of Darell R. Swanson, please visit our flower store.
Send a Sympathy Card