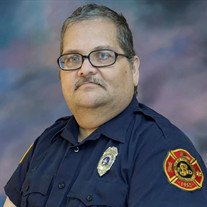 EAST PEORIA - David L. Rainey, 55, of East Peoria, formerly of Morton, passed away Sunday, February 10, 2019, at Generation of Peoria.
David was born October 4, 1963, in Oshkosh, Wisc., to Jerry and Janet (Hall) Rainey. He married Twyla Mandrell on November 28, 1987, in Germantown, Ill.
Surviving are his wife, Twyla Mandrell of East Peoria; two daughters, Theresa (Matthew) Woody of Normal, Ill. and Meghan Rainey of Edward, Ill.; one son, Zachary Rainey of Peoria; two granddaughters, Abigail and Jordyn Woody, both of Normal, Ill.; his mother, Janet Martin of East Peoria, his mother-in-law, Sharon Mandrell of Morton; one brother, Keith Martin of Metamora and one sister, Christy (Jesse) Harris of Peoria.
He was preceded in death by his father; step-father, Donald Martin; paternal and maternal grandparents; and his father-in-law, Kenneth Mandrell.
David was a veteran of the United States Army.
David was an EMS/Firefighter with Springbay Fire Protection District for three years and Northern Tazewell Fire Department for one year. He was a member of Illinois Fire Services Institute in Champaign, where he last attended in June of 2018.
He was also a member of East Peoria Faith United Methodist Church. David was also a member of the N.R.A. and Midwest Gun Club in Springbay, Ill. He enjoyed hunting, fishing, horseback riding and spending time with his grandchildren.

Memorials may be made to Springbay Fire Protection District or Northern Tazewell Fire Department.

To send flowers to the family in memory of David L. Rainey, please visit our flower store.