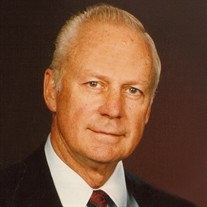 MORTON - Dolan Parkinson Hume, 90, of Morton, Ill., formerly of Prospect Heights, Ill. and Lincoln, Neb., passed away peacefully on August 8, 2019, at the OSF Richard L. Owens Hospice Home in Peoria, Ill., surrounded by family.
Dolan was born November 16, 1928, in San Bernardino, Calif. to the late Ethel (nee Parkinson) and Frank D. Hume. He met his high school sweetheart, Joyce Hardwick, in San Bernardino, Calif. and they married on September 10, 1949 in Las Vegas, Nev. They were married for more than 68 years before she passed in 2017.
He is survived by his sons, Craig Hume of Dunlap, Ill.; Corey (Brenda Wixom) Hume of Morton; daughter, Sharon (Patrick) Nudo of Prospect Heights, Ill.; 8 grandchildren, Danielle Hume, Jake (Jennifer) Hume, Matthew Hume, Caitlin (Nick) Marinig, Sarah Hume, Taylor Hume, Joe Nudo, and Sam Nudo; and 5 great-grandchildren, Madeline, Brianna, Sawyer, Aiden and Logan.
Dolan was preceded in death by his wife Joyce; brothers Bill and Ronald "Joe" Hume; sister Mary Hume; and granddaughter, Briana Hume.
Dolan was a devoted husband, and loving father and grandfather. He served in the National Guard and US Army at Ft. Ord, Calif. and Ft. Benning, Ga., attaining the rank of Master Sargeant. Dolan worked most of his life for Central Telephone (CENTEL) as a telephone engineer which took his family to Las Vegas, Nev., Lincoln, Neb., and Prospect Heights, Ill. He was an innovator, investing in and driving electric cars in the 80's, and developing a computerized platform for trading goods and services in the 80's, as well. He retired from Sprint at age 57 and began investing in Peoria area real estate. Dolan had a lifelong passion for flying airplanes, loved sports and attending his children's and grandchildren's sporting events. He also enjoyed shooting skeet and trap, playing billiards, and spending time with his family. Dolan had a huge heart and was a friend to many. He was a former member of the First United Methodist Church of Arlington Heights.
Military Honors and a Celebration of Life Gathering with food and fellowship will be held from 4-7 p.m. on Monday, August 12, 2019, at Knapp-Johnson Funeral Home and Cremation Center in Morton and at a later date at First United Methodist Church in Arlington Heights. Burial of cremated remains will be at a later date at Hirstein Cemetery in Morton.
In lieu of flowers, memorials may be made in his memory to the Apostolic Christian Restmor in Morton, Ill. or OSF Richard L. Owens Hospice Home in Peoria, Ill.
The family would like to thank the doctors, nurses, and staff of Apostolic Christian Restmor, OSF Medical Center, OSF Richard L. Owens Hospice Home, as well as his home health caregivers for the excellent care Dolan received over recent years.

To send flowers to the family in memory of Dolan P. Hume, please visit our flower store.