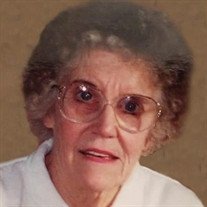 MORTON - Dolores M. Zurski, 89, formerly of Lockport, passed away Friday, March 29, 2019, at Aperion Care, Morton, Ill.
Dolores was born June 3, 1929, in Terre Haute, Ind., to Paul and Helen (Victor) Gammie. She married Steve Zurski, Jr. on August 10, 1963, in Joliet. He preceded her in death on April 7, 2005. She was also preceded in death by her parents and two sisters, Gwendolyn Book and Velma Brown.
Dolores is survived by two sons, Michael Zurski of Wadsworth, Ohio and Kenneth (Connie) Zurski of Morton; three grandchildren, Cheyenne, Samuel and Nora Zurski and several nieces and nephews.
She was a member of Saint Nicholas Orthodox Church in Joliet.
An interment service will be held at Woodlawn Memorial Park Chapel in Joliet, Monday, April 1, 2019 at 12:00 p.m. Burial will immediately follow at Woodlawn Memorial Park.
Memorials may be made to the charity of the donor's choice.
Online condolences may be sent to the family at www.knappjohnson.com.

To send flowers to the family in memory of Dolores M. Zurski, please visit our flower store.