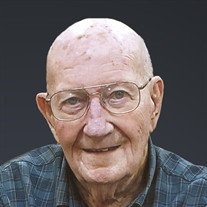 WASHINGTON - Donald M. "Don" Carius, 99, of Washington, passed away Sat., Jan. 19, 2019, at Reflections Memory Care in Washington, surrounded by his family.
Don was born June 18, 1919, in Washington, to Jack Sr. and Iva (Schertz) Carius. He married Gladys Kaufman on Aug. 31, 1940, in Washington. She preceded him in death on Dec. 16, 2008. He was also preceded in death by his daughter, Janet Renfroe, and two brothers.
Surviving are two sons, Larry (Kay) Carius of Bloomington, Ill., and Terry (Julie) Carius of Houston, Texas; one daughter, Jean (Tim) Meeks of Washington; eight grandchildren, 14 great-grandchildren, and six great-great-grandchildren. He is also survived by his sister-in-law Shirley Carius of Eureka, Ill.
Don was a United States Army veteran having served during WWII. During his service, he was a staff sergeant in the personnel division of the 9th Army Headquarters, which led him throughout the European Theatre, including the Battle of the Bulge.
Don retired from Caterpillar, Inc. after 40 years of service. He was hired as a hand trucker and advanced to Accounting Management after taking an accounting correspondence course. He was the last person to move from the factory to accounting without a college degree. After retirement, he served as a part-time tour guide at Mossville for another 20 years.
He attended Apostolic Christian Church in Morton.
Don was a life-long Chicago Cubs fan who enjoyed celebrating their latest World Series victory.

Visitation will be held from 9:30 to 11:00 a.m. on Saturday, Jan. 26, 2019, at Knapp-Johnson Funeral Home and Cremation Center in Morton. A funeral service will follow at 11 a.m. with Morton Apostolic Christian Church ministers officiating. Burial will be at Apostolic Christian Church Cemetery in Morton, where military funeral honors will be conducted by the United States Army.

In lieu of flowers, memorials may be made to Apostolic Christian LifePoints or to WHIP (Washington Helps Its People).

The family wishes to extend their gratitude to the staff of Reflections Memory Care for their continuous compassion, care, and guidance.

To send flowers to the family in memory of Donald M. Carius, please visit our flower store.