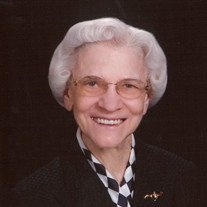 DOROTHY FRANK
MORTON - Dorothy A. (Hoerr) Frank, 93, of Morton, passed away Monday, February 4, 2019, at Apostolic Christian Restmor in Morton.
Dorothy was born Aug. 12, 1925, in Cissna Park, Ill., to Joseph and Reka (Knapp) Hoerr. She married Robert L. Frank on July 31, 1949, in Cissna Park, Ill. He preceded her in death on Jan. 18, 2015. She was also preceded in death by three sisters, Ila June Hari, Erma Miller and Edythe Stock, and one brother, Arthur Hoerr.
Surviving are two daughters, Ginger (Dennis) Hermann and Heidi (Gary) Psinas, both of Morton; five grandchildren, Adam (Elizabeth) Hermann, Aric Hermann, Anika (Ben) Bargfrede, Jesse and Jeremiah Psinas; three great grandchildren, Elise, David and Jacob Hermann; and many nieces and nephews.
Dorothy worked at Caterpillar from 1943 to 1950. After their marriage, she and Robert moved to the family farm in Allentown. During their 28 years of farming, they also raised and showed purebred Angus cattle with the help of their daughters. In 1977, they moved to Morton, where Dorothy worked in retail at many local stores including Witzig's. She retired in Dec. of 2009.

She was a member of Morton Apostolic Christian Church where a funeral service will be held at 10 a.m. Thursday, February 7, 2019, with church ministers officiating. Visitation will be from 5 to 7 p.m. Wednesday, February 6, at Knapp-Johnson Funeral Home and Cremation Center in Morton. Further visitation will be from 9 to 9:45 a.m. Thursday at the church. Burial will be in Morton Apostolic Christian Church Cemetery.

Memorials may be made to the St. Jude Runners' Association.

To send flowers to the family in memory of Dorothy A. Frank, please visit our flower store.
Send a Sympathy Card