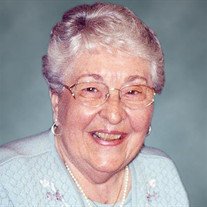 Morton - Dorothy Y. Williams, 91, of Morton, passed away Wednesday, May 31, 2017, at Lutheran Hillside Village in Peoria.
She was born Feb. 25, 1926, in Chicago, Ill., to Russell and Lillian (Young) Markell. She married Wendell "Dale" Williams on July 16, 1950, in Hannibal, Mo. He preceded her in death on March 4, 2009. She was also preceded in death by one sister, Frances.
Dorothy is survived by her children, Karen (Jay) Wiedman of Taylorville, Ill. Alan (Teri) Williams of Peoria and Laura (John) Rollet of Chatham, Ill.; eight grandchildren, Emily (Mike) Repscher, Russell (Noel) Wiedman, Mark (Tiffany) Williams, Drew (Allison) Williams, Jana (Tony) Gunther, Paul Rollet, Daniel (Shelley) Rollet, Bethany (Billy) Russell; and nine great grandchildren, Meredith, Lyla and Isaac Repscher, Trent and Hannah Wiedman, Salem and Ellie Williams, Eden Rollet and Lily Russell.
Dorothy grew up in Hannibal, Mo. and graduated from Hannibal High School in 1943. She then attended college at Hannibal La Grange Junior College and the University of Missouri before working for five years at Hannibal National Bank, where she was working when she met Dale in 1949. Within Â¬Â¬Â¬Â¬Â¬Â¬a year, they married.
They were still newlyweds when the Korean War began and Dale was called up to active duty. They drove their new Chevrolet to San Francisco, where Dale was first stationed, and stayed in California for nearly a year. When Dale sailed from California for Norfolk, Va., Dorothy took a train across the United States to join him. The romance and adventure of that train trip, and of their time together as newlyweds in California, set Dorothy on a lifetime of travel. If you knew to ask her, Dorothy could tell you of a voyage or road trip she and Dale took to see every corner of the United States. In retirement, they traveled for months at a time, eventually spending winters together with friends on the gulf of Texas, leaving Morton only after hosting the ever-growing family Christmas.
Dorothy loved to sew. She made her children's school clothes, Easter outfits and wedding dresses, and always had some project in progress, be it needlepoint, crewel, knitting or crocheting. She also loved to play games. She played bridge often with her circle of friends, cleaned house at Bingo while living at Lutheran Hillside Village, and filled the evenings of family holidays with the sound of Gin Rummy, Hearts, Spades, and the like. But this love of fun was paired with a remarkable grace and tenacity: during Dale's later struggles with dementia, Dorothy pushed past her own decades-long battle with MS to care, attentively and lovingly, for him.
Dorothy will be longest remembered as the founding matriarch of an incredibly close, happy, and successful family. Gentle and polite, Dorothy once said she couldn't talk about her family much-it would just sound like bragging. And perhaps it would have. Following Dale and Dorothy's humble, hardworking examples, her children and grandchildren have established their own beautiful families and become teachers, nurses, engineers, consultants, architects, doctors, missionaries, therapists, laboratory professionals, executives and business owners.
It would be enough, often, for Dorothy to sit and watch, smiling and laughing, at raucous family parties. So it was fitting that the day she died, Dorothy was surrounded by that family, quietly listening as her children, grandchildren, and great-grandchildren shared old stories, told new ones, and talked of adventures to come.

A funeral service will be held at 11:00 a.m. Monday, June 5, 2017, at First Presbyterian Church in Morton, with Pastor Mike Claver and Pastor Penny Frame officiating. Visitation will be from 4 to 7 p.m. Sunday, June 4, at Knapp-Johnson Funeral Home and Cremation Center in Morton. Further visitation will be held on Monday from 10 to 10:45 a.m. at the church. Burial will be in Hirstein Cemetery in Morton.

To send flowers to the family in memory of Dorothy Y. Williams, please visit our flower store.
Send a Sympathy Card