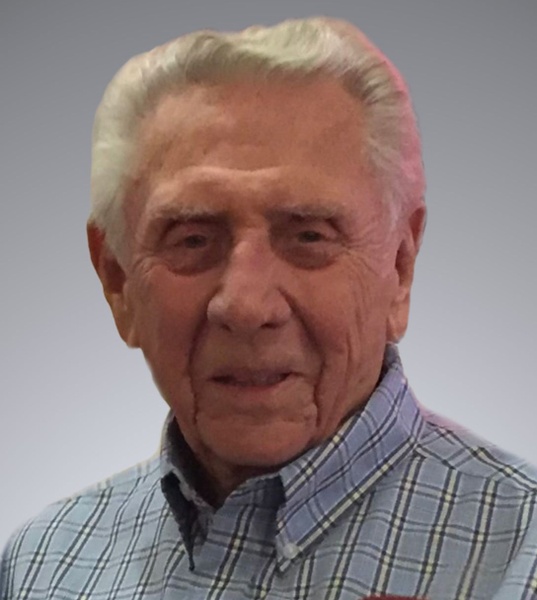 Ed was born on December 3, 1926, in St. Louis, MO to Edward Shipman, Sr. and Edna (Stazak). He married Patty Portell on July 15, 1949. She preceded him in death on May 3, 2012, after 63 years of marriage. He was also preceded in death by one great-grandson, Miles Akin and his beloved dog, Nellie.
Surviving are three daughters, Susan (Richard) Dambold of Dallas, TX, Sallie (John) Watson of Tremont and Sandy (Brian) Swinford of Morton; six grandchildren, Darrah Dambold, Brett (Lauren) Dambold, Lyndsie (J.C.) Ingold, Paige (Dan) Statz, Beau Swinford and Breck Swinford; and three great-grandchildren, Cohen and Hayden Ingold, and Brooks Dambold.
Edward served in the Merchant Marines, Navy, and Army. He was in active service during World War II and the Korean War. He graduated from St. Louis University then began his successful career as a printer in St. Louis. He retired as an owner of Edward Hines Printing in Peoria.
After retirement, he and his wife, Pat, enjoyed spending time with family and friends, traveling, and spending their winters in Venice, FL. He was an avid golfer and loved spending time outdoors. Ed was a man of integrity who was loved by everyone he met. He was known for his generosity, quick wit, sense of humor, and his ability to tell hilarious stories, mostly about his life’s adventures and misadventures. He always put his family first and will be dearly missed.
A private service will be held for Ed on Saturday, January 22, 2022, at Knapp-Johnson Funeral Home and Cremation Center in Morton. Burial will be in Glendale Memorial Gardens in Pekin.
Memorials may be made to the VFW Foundation.
Knapp-Johnson Funeral Home and Cremation Center in Morton is handling arrangements.
To leave an online condolence for the family, visit www.knappjohnson.com.

To send flowers to the family in memory of Edward "Ed" Shipman, please visit our flower store.