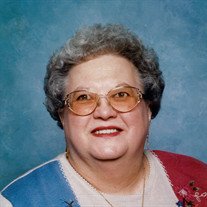 BLOOMINGTON - Eleanor M. Berghaus Taylor Lucas, 85, of Bloomington, formerly of Morton, died peacefully on the morning of Sat., Nov. 3, 2018, at her home in Bloomington. She had been in the care of OSF Hospice for one week.
Eleanor was born at home in rural Morgan County, Ill., Oct. 17, 1933, the daughter of Carl William Herman Berghaus and Esther Adeline Ommen Berghaus. Her parents died many years ago.
She attended local schools and graduated as Salutatorian from Chapin High School, class of 1951. She was the fourth of five daughters. Her parents also raised her cousin, Harold Berghaus. Harold preceded Eleanor in death as did her sisters Doris (Lloyd) Hurst, Norma (Chris) Olson, Bernice Dormire, and Judy (Eugene) Phillips. Eleanor is survived by her beloved brother-in-law, Ross Dormire of Mt. Sterling, Ill., and sisters-in-law, Burlene Taylor Nickel of Bloomington and Cleta Taylor of Concord, Ill.
One of Eleanor's fondest memories was entering a Bake-Off contest, with her sister Bernice's help, in 1949 in Jacksonville, Ill. She won First Place for her apple pie!
On Nov. 22, 1951, she married Donald W. Taylor, with whom she had four children. Their deceased son, Donald W. Taylor, Jr., and three surviving daughters, Susan (Michael) O'Rourke of Bloomington, Ill.; Patricia (Bob) Taylor of Loveland, Colo.; and Julie (Tony) Monetta of Jasper, Ind. Eleanor is survived by nine grandchildren, Michael (Rachel) Taylor of Farmington Hills, Mich., Daniel C. Taylor of Galesburg, Jon O'Rourke of Chicago, Ben O'Rourke of Denver, Hanna Taylor and Hayden (Ty) Taylor of Ft. Collins, Colo., Nick Monetta of Seattle, Wash., James Monetta of Colorado Springs, Colo., and Joe Monetta of Jasper, Ind. Eleanor lived to meet and enjoy her great-granddaughter, Lucy Taylor of Farmington Hills, Mich. She is also survived by one daughter-in-law, Judy Taylor of Galesburg and many beloved nieces and nephews.
Eleanor assisted her husband Don in running their photography studio, Taylor Studio, Inc., in Morton during their marriage. As Don's partner as a Lions Club Leader, Eleanor learned to entertain groups with her cooking and baking and loved doing so.
She later worked as at Morton Community Bank where she enjoyed the customer service parts of her various jobs. Eleanor never met a stranger!
After living and raising her children in Morton, in 1987, Eleanor moved to Ohio where she joined her daughter's family and became a "Granny Nanny". While living in Ohio, she met her second husband, Bob Lucas. She and Bob enjoyed playing cards, dining out and traveling the world together until his death on October 31, 1993. After Bob's death, she was thrilled to move back to Morton, where she enjoyed for over the next 20 years, gardening, playing bridge, baking and cooking. She was also an avid Chicago Cubs fan.

Per Eleanor's wishes, cremation rites have been accorded.
Visitation will take place at Knapp-Johnson Funeral Home in Morton from 9:00 am to 10:45 a.m., on Saturday, November 10, 2018, with a memorial service immediately following at 11:00 a.m. Inurnment of cremated remains will be at Roberts Cemetery in Morton, beside her son. Anyone attending her service is welcome to wear their favorite Cubs wear and to consider sharing any Eleanor stories or memories with those gathered.

In lieu of flowers, memorials may be made to World Wildlife Federation or to Planned Parenthood.

To send flowers to the family in memory of Eleanor M. Berghaus Taylor Lucas, please visit our flower store.
Send a Sympathy Card