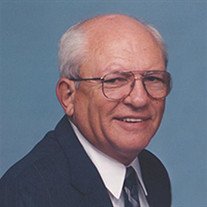 MORTON - F. Sheldon Runyon, 84, passed away Thursday, June 1, 2017, at Unity Point Health-Proctor in Peoria.
He was born Feb. 12, 1933, to Glenn and Frances (McClure) Runyon in Hire Township, McDonough County, Ill. He married Beverly J. Reno on June 11, 1955, in Macomb, Ill. She preceded him in death on Aug. 15, 2007. He was also preceded in death by one son, Paul; one son-in-law, Brian; and two infant granddaughters.
Sheldon is survived by one daughter, Catherine Rathburn of Columbus, Ohio: four sons, Victor Runyon of East Peoria, Timothy (Debbie) Runyon of Gillette, Wyo., Daniel (Connie) Runyon of Morton, and Jonathan Runyon of Littleport, England; one daughter-in-law, Julie Runyon of East Peoria; and ten grandchildren.
Sheldon served in the U.S. Army for two years during the Korean War, as a member of the Combat Engineers. He graduated with a B.S. of Mechanical Engineering degree from the University of Missouri, and worked for WABCO and succeeding companies for 31 years. He held the position of Manager of Truck Engineering at the time of his retirement in 1994.
An active member of the Society of Automotive Engineers, he held various organizational positions, and served as Section Chairman for one year. He was Cubmaster of a local Cub Scout troop for eight years. His hobbies included woodworking, stained glass design, coin collecting and golf. He also enjoyed world travel with his wife. A loved, father, grandfather and friend, he will be truly missed by many.

Visitation will be held at Knapp-Johnson Funeral Home and Cremation Center in Morton on Wednesday, June 7, 2017, from 1 to 2 p.m., followed by a Celebration of Life Service at 2 p.m. Burial will be at Hirstein Cemetery in Morton.

To send flowers to the family in memory of F. Sheldon Runyon, please visit our flower store.
Send a Sympathy Card