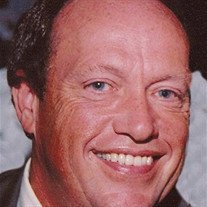 MORTON - Gary L. Wight, 68, of Morton, passed away from complications following a liver transplant on Friday, April 28, 2017, at the University of Illinois Hospital in Chicago, Ill.
Gary was born April 17, 1949 in Peoria, to Earl and Betty (Dittus) Wight. He married Linda Hoveln on October 19, 1990, in Peoria.
Surviving are his wife, Linda Wight of Morton; two sons, Thomas (Lori) Wight of Edwards, Ill. and Timothy Wight of Peoria; three step children, Michael (Candace) Reed of Hewitt, Texas, Rachael (Nicholas) Reed Bullock of Liberty Hill, Texas, Christina (Ronald Jr.) Reed Robison of Peoria; nine grandchildren, expecting the 10th in November; twin brother, Larry (Nina) Wight of Peoria; brother, Bob (Penny) Wight of Bryant, Ill.; sister Barbara (Steve) Zilch of Bartonville, Ill.; mother-in-law, Grace Hoveln of Penfield, Ill.; and 11 nieces and nephews.
He was preceded in death by his father-in-law, brother-in-law and a niece and a nephew.
Gary worked for Caterpillar Inc. since 1971, retiring on February 1, 2009. After retiring, he continued consulting for Caterpillar Inc., working in both Lafayette, Ind. And Singapore. While working at Caterpillar, Gary was also a patrolman on the Elmwood Police Department and later became the Chief of Police of Glasford.
Gary was a United States Army veteran having served from 1969 to 1971.
He was a member of the Morton Optimist Club, the Morton Masonic Lodge 352, and American Legion Post 318.
Gary was always very generous to hosting his family and opening up his house to all. He enjoyed spending time with his grandchildren and golfing. Friends and family knew him to be one of Judge Judy's biggest fans.
A funeral service will be held at 11 a.m. Wednesday, May 3, 2017, at Trinity Lutheran Church in Peoria, with Pastor Mark Nelson and Pastor Matthew Synnott officiating. Visitation will be held Tuesday, May 2, 2017, from 5 to 7 p.m., at Knapp-Johnson Funeral Home and Cremation Center in Morton. Further visitation will be from 10 to 10:45 a.m. Wednesday at the church. Graveside service will be held at 1 p.m. Saturday, May 6, 2017 in Kopman Cemetery in St. Joseph, Ill.

To send flowers to the family in memory of Gary Wight, please visit our flower store.
Send a Sympathy Card