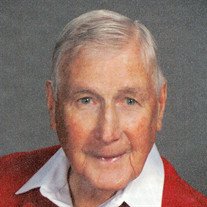 CARL EUGENE "GENE" SHRADER
MORTON - Carl Eugene "Gene" Shrader, 81, of Morton, passed into the arms of Jesus, surrounded by his family, on Mon. Dec. 11, 2017, at 3:17 p.m., after a battle with appendix cancer.
Carl was born June 20, 1936 to Carl and Cleo Shrader in Shannon City, Iowa. He was the fifth of ten children. At the age of seven, his father passed away during surgery. All ten children were raised by their single mother.
Gene is survived by his wife, Aga Rita, of 54 years, who is a caregiver, mother and grandmother. She was Gene's travel companion, card partner, and devoted church member. He is also survived by three children, Kelle (Mark) Ashton of Omaha, Neb., Darin (Melissa) Shrader of Normal, Ill, and Amanda Shrader of Morton; and four grandchildren, Caleb (Erica) Ashton and Caysie Ashton, all of Lexington, K.Y., and Josiah Ashton and Haiven Ashton of Omaha, Neb. He is also survived by two sisters, Deloris (William) Fox, Barb (Larry) Osterhagen and one brother Emmett (Carla) Shrader, and a host of nieces and nephews and blessed with multitudes of good friends.
He was preceded in death by his parents, five brothers, and one sister.
Gene began working at age 9 at a local grocery store to help support the family. He graduated from Rock Island High School in 1954, and then served in the Army from 1958 to 1960 as a cook in a variety of posts around the world, including Greenland.
Gene married Aga Rita Nelson on September 29, 1963 in Milan, Ill. He then went back into the grocery business where he gained a reputation for hard work, honesty, and an uncanny business sense, representing national products such as Green Giant, Gatorade, and Planters Peanuts. As a result of his hard work and dedication, Gene accelerated to an executive leadership role with Calkins and Co. Food Brokerage Company.
He retired in 1992 as an owner of the company. After retirement he became active in the banking industry and became a board member of Morton Community Bank, recently retiring from this position. Gene also served as a Morton City Councilman and a deacon at New Castle Bible Church. In 1998, Gene and his son started Parkway Auto Laundry car wash in Bloomington, Normal. This company will celebrate 20 years of operation in January 2018.
Gene loved his adopted hometown of Morton, where he spent most of his adult life. He loved playing golf, softball, Euchre, reading, cookouts, and traveling to all fifty states and around the world with family and friends. He especially loved his annual fishing trip with friends to remote locations in Canada. Gene became a follower of Jesus at age 56 and passionately followed Him as a member of New Castle Bible Church, and considered New Castle his spiritual family until his final day. Gene was known for his wide-ranging generosity to his family, his church, the poor, missionaries, and special projects. He traveled the world on mission trips to China, Israel, Costa Rica, Mexico, and more.

A funeral service will be held at New Castle Bible Church, 17931 Dee Mac Rd, Mackinaw, IL 61755, at 3 p.m. on Sat., Dec. 16, 2017, with Gene's son-in-law Pastor Mark Ashton and Pastor Phil Somers officiating. Visitation will also be held at the church on Fri., Dec. 15, from 3 to 6 p.m. Additional visitation will be from 2 to 2:45 p.m., prior to the service on Saturday. Burial will be held at a later date at New Castle Bible Church Cemetery in Mackinaw.
Cremation rites will be accorded following services.

In lieu of flowers, memorials may be made to New Castle Bible Church.

To send flowers to the family in memory of Gene Shrader, please visit our flower store.