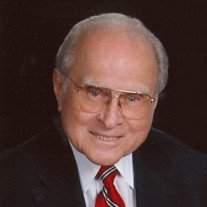 MORTON - Henry C. "Hank" VanderHeyden, 94, of Morton, passed away Thurs., Aug. 16, 2018, at his residence.
Hank was born April 5, 1924, in South Pekin, to Rollin and Mary (Lord) VanderHeyden. He married Charlotte M. Anderson on June 12, 1949, in Pekin. He later married Carol J. (Garber) Hayes on Jan. 30, 1999, in Morton.
Surviving are his wife, Carol of Morton, and her sons, Jordan Mott of Dallas, Texas and Bradley Hayes of Columbus, Ohio, and daughter Alicia Cicarelli of St. Louis, Mo. He is also survived by three nieces, Sherry (VanderHeyden) Arnett, Peggy (Fabry) Collins, and Susan (Potter) Koonce; two nephews, Mark Fabry and William Horvat; and two sisters-in-law, Dorothy VanderHeyden and Lucille Horvat
He was preceded in death by his parents; one son, Kurt O. VanderHeyden; and one brother, Rollin L. VanderHeyden.
Henry graduated from Pekin Community High School in 1942, and then served in the U.S. Army with the Second and Twelfth Armored Divisions in France and Germany from 1943 to 1946, as a combat medic receiving the Combat Medical Badge and Bronze Star Medal for Valor.
Benefiting from the GI Bill, he received his bachelor's degree in 1950, and master's degree in 1951, from Bradley University. He then joined the Bradley University Speech Department and served as a member of its faculty for thirty-seven years and also as acting chairman of the Department of Speech and Theater Arts from 1970 to 1971, retiring as an associate professor and professor emeritus in 1988. Following retirement from Bradley, he worked for fourteen years as the senior outreach coordinator for Prairie State Legal Services.
Active in the community, Henry was a past president of the Pekin Jaycees and a past post commander of South Pekin VFW Post 6484. He served for twenty-four years as a member of the Pekin City Council and four years as a member of the Tazewell County Board of Supervisors. Henry was a member of the Pekin Memorial Hospital Board of Trustees for twelve years, serving as secretary, vice-president, and president. He also served as a member and chairman of the administrative board of Pekin Grace United Methodist Church.
Henry will be remembered for his life-long allegiance to the Chicago Cubs, his passion for fishing, and his love of family and friends.

Cremation rites have been accorded.
A memorial service will be at 11 a.m., Wed., August 22, 2018, at Morton United Methodist Church, with Pastor Gabe Wanck officiating. Burial will be held at Antioch Cemetery in Tremont at a later date.

Memorials may be made to Morton United Methodist Church.

To send flowers to the family in memory of Henry C. VanderHeyden, please visit our flower store.