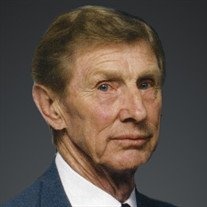 PEORIA - Hershel Parker Lester, 96, formerly of Metamora, went home to be with the Lord at 2:03 p.m. on Sun., Oct. 14, 2018, at Bickford Senior Living Memory Care of Peoria.
The oldest of five children, he was born on Aug. 20, 1922, to Ralph and Jesse Lester in Bokchito, Okla. Hershel married Joanna Sales on Feb. 8, 1944, in Chicago, where he was stationed in the U.S. Army. He served during World War II from 1942 to 1945. After his honorable discharge, they moved to Peoria to start a family.
Surviving are his four children, Rebecca (Stephen) Audrain of Reno, Nev., Dennis (Shelly) Lester of Mt. Pleasant, Texas, Gail Reynolds of Peoria, and Lon (Dawn) Lester of Williamsfield, Ill. Also surviving are 13 grandchildren; 14 great-grandchildren (with another due next month); two sisters, Virginia Huggins and Edna Jean Bradley, both of Tulsa, Okla; one sister-in-law, Roliene Sales of Eureka; two brothers-in-law, Roger (Nancy) Sales of Eureka and John Hazelrigg of Bartonville; and son-in-law, David Hughes of Washington.
Hershel was preceded in death by his wife, Joanna in 2013; oldest daughter, Claudia Hughes in 2016; one brother, Huey Lester; and one sister, Betty Marquette.
As a child, Hershel's family moved to Sand Springs, Okla., where he later graduated from high school.
He pursued a career in woodworking and eventually became a master craftsman. Hershel opened his own cabinet shop, Custom Woodworkers Mfg. Co., where he designed and built beautiful custom cabinets for enumerable homes in and around Peoria.
After retiring, he and Joanna spent six years in Laguna Beach, Calif., as estate managers on an 11-acre property overlooking the Pacific Ocean. Many family members enjoyed visiting Hershel and Joanna during that period.
A true family man, he taught his children and grandchildren, by example, the valuable lessons of faith in the Lord Jesus, devotion to family, and hard work. Later in life, he frequently commented how happy he was that all of his children had a personal relationship with the Lord, since ultimately that's all that mattered.

A funeral service will be held at 10:30 a.m., Fri., Oct. 19, 2018, at Knapp-Johnson Funeral Home and Cremation Center in Morton, with a visitation held one-hour prior. Rev. Bill Cordes will officiate. Burial will be at 1 p.m. on Friday at Swan Lake Memory Gardens in Peoria, where military funeral honors will be conducted.

Memorials may be made to Bickford Senior Living Memory Care in Peoria.

To send flowers to the family in memory of Hershel P. Lester, please visit our flower store.