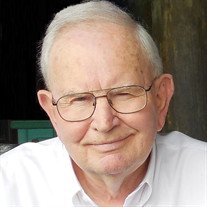 Morton - Ray Crump, 90, of Morgantown, Ky., formerly of Morton, passed away Friday, October 26, 2018, at Hospice of Southern Kentucky in Bowling Green, Ky.
He was born June 3, 1928, in Eureka, Ill., son of the late Edward Ivan Mildred (Treece) Crump. Ray married Mildred "Mid" Taylor December 12, 1948, in Danvers, Ill. She preceded him in death on July 27, 2002, in Normal, Ill. He later married Marie Porter Embry on December 4, 2004, in Morgantown, Ky. She survives.
Ray is survived by one daughter, DonaKay (Chuck) Rein of Aransas Pass, Texas, one son, John D. Crump (Magrit) of Spring Hill, Fla., one daughter-in-law, Jan Crump of Normal, Ill., and one step-daughter, Shirley (Barry) Givens of Morgantown, Ky. Ray has 11 grandchildren, 19 great-grandchildren, three great-great grandchildren, nine step-grandchildren, 12 step great-grandchildren, and one sister, Kay Oerhlerich of Albert City, Iowa, as well as several nephews, nieces and cousins.
He was preceded in death by one son, Ralph Edward Crump, one step-son, Royce Embry, one step-daughter, Sharon McCoy, and two sisters, June Price and Donna Leonard.
Ray graduated from Danvers High School in Danvers, Ill. He was a veteran having served in the U.S. Army.
Ray worked at Caterpillar Tractor Company, Inc. for 43 years. He was of the Baptist faith and an avid Cubs fan.
Visitation for Ray will be held Tuesday, October 30, 2018, from 9:30 to 11 a.m. at Knapp-Johnson Funeral Home and Cremation Center in Morton, followed by a funeral service at 11. Pastor Lynn Thebarge will officiate. Burial will be in Park Lawn Cemetery in Danvers, Ill., where military honors will be conducted.

Memorials may be made to the charity of donor's choice.

To send flowers to the family in memory of Ivan Ray "Bud" Crump, please visit our flower store.