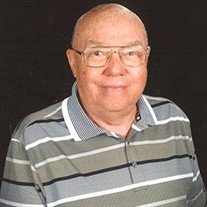 MORTON - James T. "Jim" Destefano, 87, of Morton, passed away Sunday, June 23, 2019, at OSF St. Francis Medical Center in Peoria.
Jim was born February 12, 1932, in Monessen, Pa., to James and Jessie (MacAlpine) Destefano. He married his wife, Jean on August 24, 1985, in Lincoln, Ill.
Surviving are his wife, Jean Destefano of Morton; his children, Tom (Merrie) Destefano of Santa Ana, Cali., Bob Destefano of Guangzhou, China, Dan (Liz) Destefano of Norfolk, Va., Scott (Amy) Neece of Lincoln, Ill. and Jodi Neece of Lincoln, Ill.; seven grandchildren and seven great grandchildren.
He was preceded in death by his parents and one step-son.
Jim worked as an engineer at PPG for 38 years.
He was a member of Morton United Methodist Church and Pekin Country Club.
Jim was an avid golfer and had golfed in all 50 states.
Cremation rites have been accorded. A graveside service will be held at 11:30 a.m. Friday, June 28, 2019, at Cerro Gordo Cemetery in Cerro Gordo, Ill., with Pastor Gary L. Feldman officiating.
Knapp-Johnson Funeral Home and Cremation Center in Morton is handling arrangements.

Memorials may be made to Morton United Methodist Church Building Fund or American Cancer Society.

To send flowers to the family in memory of James T. Destefano, please visit our flower store.