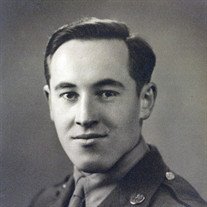 JAMES L. RUSSELL
MORTON - James Lowell Russell, 96, of Morton, passed away peacefully on Tues., Feb. 13, 2018 into his heavenly home at Apostolic Christian Restmor Nursing Home in Morton.
James was born April 4, 1921 in Danville, Ill., to Charles and Louise (Wollerman) Russell.
He grew up and lived in Danville the majority of his life, where he attended Cannon Grade School and Danville High School. After retiring in 1985, he moved to Morton. He attended Utterbach Brown Business College until joining the Army Air Corps. He served during WWII and attained the rank of sergeant of the 3rd Division while in England. Just after retiring from WWII, he met the love of his life, Ethel C. Ingold, at church. They were married May 14, 1950 at First Baptist Church in Danville. They celebrated 62 years of marriage before her death in 2012.
James was also preceded in death by his parents and sister Evelyn Russell.
Surviving are two daughters, Carol (James) Cox of Normal and Mary (Brian) Aaron of Peoria; five grandchildren, Jamie (Rebecca) Cox of Normal, Amber (Jason) Redoutey of Williamston, Mich., Stephen (Nicole) Cox of Springfield, Ill., Jodi (Jamie) Dent and Kari Cox, all of Nashville, Tenn.; and six great-grandchildren, Haven and Emery Cox of Normal, Caleb and Abby Redoutey of Williamston, Mich., and Aubrey and Corbin Cox of Springfield, Ill.
James was a printing pressman for Recording & Statistical (R&S) Corporation in Danville for 45 years.
He was a devoted son, husband, father, and grandfather with a servant heart. His love of baseball started as a child by playing with neighbor friends in a vacant lot that led to him being a faithful Chicago Cubs fan. He was elated to see them win the World Series. Many of his best memories were made around a campfire while taking camping trips all across the United States with his family.
His faith in Jesus Christ was important to him and he loved serving his Lord at First Baptist Church of Danville and First Baptist Church of Morton.
James appreciated the loving care from the staff at Apostolic Christian Restmor Nursing Home during the last four years of his life.

Visitation will be held from 10 to 11 a.m. on Monday, Feb. 19, 2018 at Knapp-Johnson Funeral Home and Cremation Center in Morton. Immediately following the visitation, a funeral service will take place at 11 a.m., with Rev. Nicole Cox officiating. Following services, burial will be at Roberts Cemetery in Morton, where full military honors will be conducted.

Memorials may be made to the Maranatha Bible & Missionary Conference, 4759 Lake Harbor Road, Muskegon, MI 49441.

To send flowers to the family in memory of James L. Russell, please visit our flower store.