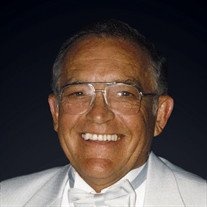 MORTON - James V. "Jim" Scime, 86, of Morton, passed away Fri., Dec. 21, 2018, at Apostolic Christian Skylines in Peoria.
Jim was born June 6, 1932, in Kankakee, Ill., to Joseph and Ilo (Correll) Scime. He married Dolores Cote on June 15, 1952, in Kankakee. She preceded Jim in death on Aug. 15, 2010. He was also preceded in death by one sister, Josephine (Scime) Ridenour.
Surviving are three sons, Jim (Karen) Scime of Morton, Mike (Cindy) Scime of Dunlap, and Steve (Lori) Scime of Penfield, N.Y.; and one brother, Joe (Nancy) Scime of West Dundee, Ill. Also surviving are nine grandchildren, 14 great-grandchildren, and one great-great-granddaughter.
Jim was a person who blended together a life full of passion for family, friends, sports, coaching, and community service along with a long and successful career. In his earlier years, Jim played semi-pro baseball/softball for the famous Kankakee West Side Boosters in the early 1950's.
He served in the U.S. Air Force from 1952 to 1956, at Keesler Air Force Base in Biloxi, achieving the rank of Staff Sergeant. He coached the Base basketball team, was player-coach of the Base softball team and was a sub on their baseball team.
Jim was elected and served as 5th Ward Alderman on the Kankakee City Council from 1963 to 1966.
Jim worked at Illinois Bell Telephone and AT&T in Kankakee, Springfield, Peoria, and the Chicago suburbs, retiring with 34 years of service in 1990. He spent 14 years as Peoria Area Manager of Special Services and Long-Distance for Illinois Bell from 1970 to 1984 and was a member of the Telephone Pioneers Club.
Jim enjoyed serving as administrator and coach of youth baseball for the Kankakee Lions Little League and Springfield Iles Park Pony League. His 25 consecutive years of fishing trips to Canada with his Peoria Bell friends was an annual highlight for him. During retirement, Jim helped coordinate and run the Senior League at Pine Lakes Golf Course for several years, where he enjoyed golfing with long standing friends and visiting with his friends, who took great care of his favorite course. Jim never met a stranger.
Jim was a member of Blessed Sacrament Catholic Church in Morton.

Visitation will be held on Fri., Dec. 28, 2018 from 5 to 7 p.m., at Knapp-Johnson Funeral Home and Cremation Center in Morton. A funeral Mass will be at 10 a.m., Sat., Dec. 29, at Blessed Sacrament Catholic Church in Morton, with Msgr. Gerald T. Ward officiating. A visitation will be held prior to the Mass from 9 to 9:45 a.m. Burial will be at Hirstein Cemetery in Morton, where military funeral honors will be conducted.

Memorials may be made to Blessed Sacrament Catholic Church in Morton.

To send flowers to the family in memory of James V. "Jim" Scime, please visit our flower store.