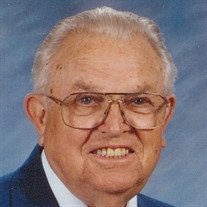 PEORIA - James M. Warfield, 95, formerly of Morton, passed away July 6, 2019 at Lutheran Hillside Village in Peoria.
Jim was born on July 7, 1923, in Ft. Collins, Colo., to Arthur J. and Sibyl (Stewart) Warfield. He married Doreen Sprague, on July 13, 1946, in Lakewood, Colo.
Surviving are his wife, Doreen Warfield of Lutheran Hillside Village; son, Rob Warfield of East Peoria; daughter, Patti Echols of Springfield, Mo.; and granddaughter, Jamie Echols of Honolulu, Hawaii. Also surviving are a sister-in-law, Roberta Warfield; one niece; three nephews; and their families. He was preceded in death by his parents, and brothers, Robert and Thomas.
Jim was a 2nd Lieutenant in the Army Air Corps, serving as a bombardier on a B-17 with the 366 Bombardment Squadron, from Sept. 1944 to Aug. 1946. At the close of WWII, he was involved in the "Casey Jones" project, a collection of aerial mapping imagery of Europe and North Africa.
Jim attended Colorado School of Mines, completing a Masters in Metallurgical Engineering in 1951. He then began his 31 year career with Caterpillar, in East Peoria. He worked as a lab engineer in the met lab, inspection technician, and inspection foreman. In 1964, he became Quality Control Manager in San Leandro, Calif. He returned to East Peoria in 1970 and was the Quality Assurance Manager until he retired in 1982.
After retiring, Jim and Doreen enjoyed life on the road in their travel trailer. They covered the United States, Canada, and even made a trip to Mexico. There were many fishing trips to Colorado and Alaska. Many of their friends would meet up with them along the way. They also visited their daughter when her family was stationed overseas, seeing where Jim had been during his time in the military. Those who did not travel with them, were treated to an "arm-chair travelogue" on their return home.
A memorial service will be held Friday, July 12, 2019, at 2:00 pm, at Lutheran Hillside Village, 6901 N. Galena Rd., Peoria, IL with Rev. Gary Feldman of Morton UMC officiating.
In lieu of flowers, memorials can be made to Morton United Methodist Church Building Fund, or the Lutheran Hillside Village Benevolent Fund.

To send flowers to the family in memory of James M. Warfield, please visit our flower store.