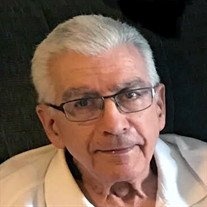 JOHN M. GENOVESE, JR.
MORTON - John M. Genovese, Jr., 77, of Morton, passed away peacefully at 7:20 a.m., Tues., April 17, 2018, at Villas of Holly Brook Assisted Living in Morton, where he has resided for the last 3 years with his very loyal dog Bailey. His daughter, Michelle, was by his side during his time of passing. Previous days were spent surrounded by the love and support of all his daughters, son, grandchildren, sisters, and extended family.
John was born Oct. 4, 1940, in Hannibal, Mo., to John M., Sr. and Marjorie L. (Harrell) Genovese. He married Gloria J. Spillane on Aug. 16, 1958 and had their marriage blessed on March 17, 1962 in the Church of St. Patrick in Peoria. They were both caring and loving parents to four children.
Surviving are his three daughters, Michelle R. King (Eric) Crabtree of Goodfield, Ill., Lorey A. (Michael) Schlehuber of Morton, and Trisha J. Genovese (Bob Schoolman) of Peoria; one son Michael J. (Michelle) Genovese of Peoria; 10 grandchildren, Ashley, Anthony, Abbey, and Andrew King, Christian and Clair Schlehuber, Austin and Madison Pudik, and Michael Jr., and Meagan Genovese; and two great-grandchildren, Rylan Ball and Liam Genovese; and four sisters, Rose (Richard) Dawson, Sandy (Steve) Mocilan, and Toni (Jim) Smalley, all of Peoria, and Bernadette (Dan) Williams of St. Louis, Mo. There were special employees who would assist John and share laughs to help keep his spirit up. You know who you are there at Villas of Holly Brook.
John was preceded in death by his parents, one great-grandchild, Nevaeh Ball, and his beloved wife Gloria.
His family moved to Peoria when he was 7. He then attended St. Joseph Grade School and church, where he altar served and sang in the choir. He attended Manual and Spalding High School in Peoria, where he met and married his high school sweetheart and raised his family.
John had a very strong work ethic. He started working as a young boy delivering newspapers. As a teenager, he worked at Texaco & Marathon gas station, and helped out at his dad's Skelly Station washing cars and pumping gas for customers. He also worked as head usher at the Rialto Movie Theatre and worked in the automotive department at Sears. As a young adult with a growing family, he worked as a salesman for Hobart Restaurant and Equipment and also for Sidney Harrison Hotel and Restaurant Supplies. He owned and operated Genovese Cutlery successfully for over 30 years and retired due to complications with Parkinson's disease. When John wasn't working to provide for his family, he could also be found volunteering as a fireman in Peoria during the 1970's.
John really was a kind, caring, and supportive man to his children. He raised them to help and respect others. He had a few sayings he often used, "it is what it is" and "God helps those who help themselves." He enjoyed fishing and was an avid St. Louis Cardinals fan.
John battled heart disease for over 38 years and Parkinson's Disease for the last 18 years. With all his struggles and to the amazement of us all, he NEVER complained about it.

John was a member of Blessed Sacrament Catholic Church in Morton where services will be held. Visitation will be held at the church from 4 to 7 p.m., Mon., April 23, 2018. A memorial Mass will be at 11 a.m., with a visitation held prior to the service from 10 to 10:45 a.m., at the church on Tues., April 24. Msgr. Gerald Ward will officiate. Together again, John and Gloria will be laid to rest at Hirstein Cemetery in Morton.

Memorials may be made to Parkinson's Foundation or to St. Jude Runners Association.

To send flowers to the family in memory of John M. Genovese, please visit our flower store.