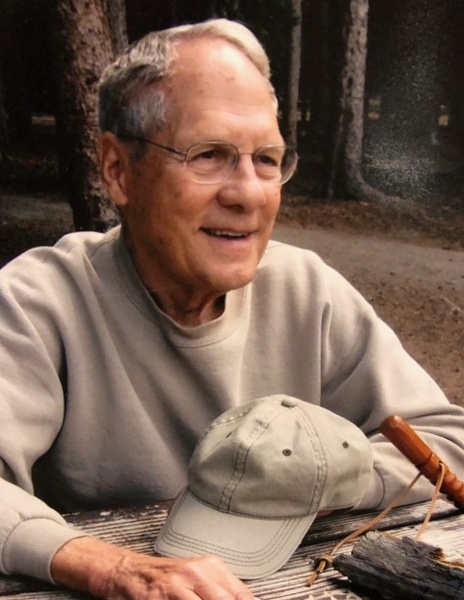 John’s early years were greatly influenced by his summers spent on his aunt and uncle’s farm.  He loved working the land, and this became a passion that continued throughout his adult life.

After completing two years, he took a break from his studies to enlist in the U.S. Marine Corps and went to boot camp in San Diego, which John described as “pretty rough.”  John was deployed to Korea and was the first American unit to get above the 38th parallel. When John returned to the U.S., he used the GI bill to enroll at Kansas State University and completed his degree in Agricultural Engineering.

After graduating, John began his career at Caterpillar, Inc., and proudly retired as an engineer for the Service Technology Group over 40 years later. Several of John’s patents are still used to maintain Caterpillar machines today.

While working for Caterpillar in Colorado, he and Elaine were introduced to each other by their aunts.   John and Elaine fell in love and married in 1958, in Aurora, Colorado. They later moved to Morton, where John has been a resident for over 55 years.

Together, they watched with pride as their children attended Morton High School and the University of Illinois.  Always focused on their roots in Kansas and Colorado, they took wonderful summer vacations to visit family and especially enjoyed their time together at the family cabin in Evergreen, Colo. John always smiled ear to ear when he drove to Colorado through the miles of wheat fields in Kansas.

John volunteered throughout his professional career as a member of Morton United Methodist Church, and during his retirement, he was a loyal member of the Tuesday Morning Work Group.

His curiosity high, John’s interests were many, and he was a great conversationalist with a cup of coffee in hand, always wanting to appreciate the details shared in stories.  He loved all sports, with a special place in his heart for football and basketball, especially when the Kansas State Wildcats, Fighting Illini, or Morton Potters were playing.

He spent his last 25 years in retirement providing love and support to his family and sharing his joy for life and passion for the outdoors with his grandchildren.  His winning smile, warm heart and love of God will always be remembered.  Forever the Kansan and Marine!

A funeral service will be at 11 a.m. on Friday, February 26, 2021, at Morton United Methodist Church, with Pastors Gabe Wanck and Michael Paulson officiating. Visitation will be from 5 to 7 p.m. on Thursday, February 25, 2021, at Knapp-Johnson Funeral Home and Cremation Center in Morton, and also from 10 to 10:45 a.m. on Friday, prior to the service at the church. Social distancing guidelines will be observed during the visitation and funeral service and masks are required.  Burial will be in Hirstein Cemetery in Morton, where military rites will be conducted.

Memorials may be made to the Morton United Methodist Church, Wounded Warrior Project or Operation Smile.

To view John's online video tribute or to leave a condolence for the family, visit www.knappjohnson.com.

To send flowers to the family in memory of John Lindquist, please visit our flower store.