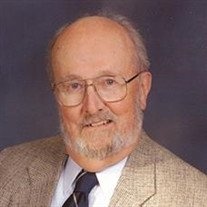 PEORIA - John David Opem, 86, of Peoria, passed away Saturday, February 1, 2020, at OSF Saint Francis Medical Center, surrounded by his loving wife and family.
John was born on February 23,1933 in Rochester, Minn.,to Palmer and Elizabeth (Ulrich) Opem of Zumbrota, Minn. He was raised in Zumbrota until he finished high school as the valedictorian of his class. He attended St. Olaf College, in Northfield Minn., graduating in June 1955. After graduation he began working as an Analytical Chemist for Swift & Co. at the R&D Center in Chicago's Union Stockyards.
In June 1956, John was drafted in the United States Army. Most of his service in the Army was spent in California where he was a member of the Veterinary Food Inspection Service. There he was engaged in laboratory and field inspections of food purchased for all of the military services. He returned to Swift & Co. following his honorable discharge from the Army in June 1958 and continued there as a research chemist and later as literature chemist.
In January 1960, he and Joyce Dawn Stefan of Hartford, Wis. were married in Chicago. In 1961, John enrolled at the University of Chicago, Graduate School of Library and Information Science where he completed studies for a master's degree in Library Science. During that time, he transferred into the Swift & Co. Research Library as a Literature Chemist.
In 1965, he changed companies joining Abbott Laboratories as Head Librarian in the Abbott R&D Division. During his 30 year Abbott career, John also held positions as manager in the Research Information Center and as manager in the Library and Information Services, retiring in September 1995. As manager of Clinical Study Records, he was recognized with eight Abbot Presidential commendations for his team's participation in submissions of new drug applications to the Food and Drug Administration. John represented Abbott in the Information Committee of the Conference Board as well as other various local, national and professional information organizations. Throughout his working years, John was active in communities and churches serving on church councils and committees and leading three church building programs, fundraisers and a pipe organ project. In addition, he served on the Board of Directors of the Waukegan (IL) Public Library and the Salem (WI) Township Public Library where he was involved in a project to build a new library. John was active with both of his sons in YMCA Indian Guides and Boy Scouts.
John was an Emeritus member of the American Chemical Society, a Life member of the American Library Association and a member of the Special Libraries Association.
John was extremely proud of his Norwegian heritage. He joyfully ate Lutefisk and lefse every Christmas and proudly wore his wool Norwegian sweaters whenever he could. He and Joyce traveled extensively, most notably to Norway several times where he connected with his Norwegian cousins and relatives. John extensively researched and compiled his family's genealogy back to the early 1600's.
Always a voracious reader, John instilled a love of books in his children and grandchildren and was always ready to discuss new ideas and thoughts. Most of all, John enjoyed spending time with his family, especially his grandchildren. They will always remember his love of fishing, watching Jeopardy, playing trivia games and reading together. His faith and devotion will continue to inspire and sustain his family and although he will be missed greatly, we know he is in Heaven with his Lord and Savior. Well done, good and faithful servant.
Survivors include his wife Joyce (Stefan) Opem of 60 years; children Jeffrey (Kim) Opem of Glen Ellyn, Ill., Jennifer (William) Ziemniak of Morton and Jonathan Opem of Mesa, Ariz. Other survivors include seven grandchildren, Bethany (Ben) Ragains, Daniel (Anna) Ziemniak, Michael Ziemniak, Joseph Ziemniak, Coral Opem, Pearl Opem, and Daniel Opem; his brother Richard (Carol) Opem of Downingtown, Pa. and many nieces and nephews.
He was preceded in death by his parents, three brothers, Frederick, Karl-Thomas and Robert and his sisters, Mary Elizabeth and infant sister Patricia.
Cremation rites have been accorded. A memorial service for John will be held at 11 a.m. on Saturday, February 15, 2020 at Advent Lutheran Church in Morton. Visitation will be from 10 to 10:45 a.m. on Saturday, prior to the service at the church. Burial of cremated remains will be at a later date at Zumbrota Cemetery in Zumbrota, Minn.

Memorials may be made to Advent Lutheran Church in Morton.

To send flowers to the family in memory of John D. Opem, please visit our flower store.