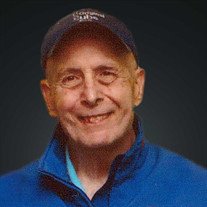 JOSEPH W. LERNER
MORTON - Joseph W. "Joe" Lerner, 82, of Morton, passed away Sun., Nov. 19, 2017, at Liberty Village in Peoria.
Joe was born Dec. 25, 1934, in Chicago, to George and Diane (Tamburelli) Lerner. He married his wife Kathy Fondriest on Nov. 6, 1976 in West Peoria.
Surviving are his wife Kathy of Morton, daughter Jennifer (Drew) Henneberg of Bloomington, son Matthew (Becky) Lerner of Chicago, and two granddaughters, Charleigh and Andie. He is also survived by his sister Karen Wing of Tamarak, Fla.
Joe was preceded in death by his son Sean and brother Richard.
Joe is a United States Army veteran having served from Jan. 1955 to Nov. 1956.
He attended college in Chicago where he graduated from both Roosevelt University and also from the University of Illinois.
He worked as a journalist for Peoria Journal Star for 14 years, retiring in 1986, and later worked a few years after retirement for Pekin Times.
Joe was an avid fan of most Chicago sports teams, especially the Cubs. He was passionate about writing and even wrote several short stories, poems, and an unpublished science fiction novel.
He was a loving and devoted husband and father. He took great pride in spending quality time with his family.

Cremation rites have been accorded.
There will be a private service held for the family at Knapp-Johnson Funeral Home and Cremation Center in Morton.

In honor of his granddaughter, Charleigh, memorials may be made to PKU Organization of IL, P.O. Box 102, Palatine, IL 60078.
To send flowers to the family in memory of Joseph "Joe" Lerner, please visit our flower store.
Send a Sympathy Card