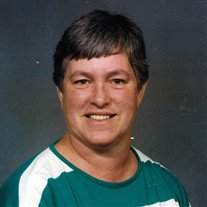 LINDA L. HORSLEY
CASTLETON, ILL. - Linda L. Horsley, 75, of Castleton, Ill., passed away Mon., May 7, 2018, at OSF Richard L. Owens Hospice Home in Peoria.
Linda was born Feb. 5, 1943, in Kewanee, Ill., to Arthur and E. Catherine (Lanpher) Smith. She married Richard Horsley Sr. on Feb. 6, 1965 in Peoria. Richard preceded her in death on April 21, 1994. She was also preceded in death by her son, John; step-son Richard Jr.; three brothers and two sisters.
Surviving are one son, Ronald (Karen) Horsley of La Fayette, Ill.; two daughters, Janice (Michael) Tedrick of Lincoln, Ill., and Pam (John) Driskell of Washington, Ill.; and nine grandchildren, Katie, Gabe, Kody, Arissa, Travis, Alex, Lexi, David, and Johnathan. She is also survived by four sisters, Shirley (Donald) Stewart of Castleton, Joan Norwood of Mercersburg, Pa., Frieda Dotson of Washington, Ill., and Patricia (Vic) Edwards of Orlando, Fla.; and four brothers, Eugene (Rose) Smith of Debary, Fla., Ronald Smith of Castleton, Edward (Marie) Smith of Toulon, Ill, and Thomas Smith of Gatewood, Mo.
In her earlier years, Linda worked as a sales clerk for Walgreens and Schradski's, both in Peoria. She later enjoyed being a dedicated homemaker who took pride in caring for her family. She found great joy in taking vacations and making memories with her family.
She was an avid collector of porcelain dolls and was also fond of baking.
Linda was a devout member of Church of the Nazarene in Wyoming, Ill.

A funeral service for Linda will be at 11 a.m., Fri., May 11, 2018 at Knapp-Johnson Funeral Home in Morton, with Pastor Tammy Shane officiating. Visitation will also be held at the funeral home from 5 to 7 p.m., Thurs., May 10, and also from 10 to 11 a.m., prior to the service on Friday. Burial will be at Lakeside Cemetery in Pekin.

Memorials may be made to the Church of the Nazarene in Wyoming, Ill.

To send flowers to the family in memory of Linda L. Horsley, please visit our flower store.