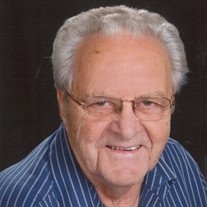 EUREKA - Louis Lee Holliger, Sr., 83, of Eureka, passed away at 9:43 p.m., on Mon., Oct. 1, 2018, at his home surrounded by his loving family. He had ALS since 2012.
Louis was born on March 6, 1935, in Goodfield, to John and Lydia (Reeser) Holliger. He married Betty Moser on March 29, 1957, in Creve Coeur, Ill. She survives.
Also surviving are two sons, Louis (Terri) Holliger, Jr. of Washington and Larry John (Lynn) Holliger of Goodfield; three grandchildren, Rachel Holliger Huskins, Lydia Holliger Hasten, and Megan Holliger; two step-grandchildren, Drew Guymon and Melissa (Jon) Foster; three great-grandchildren, Jace Huskins, Bria Huskins, and Amelia Hasten; and five step-great-grandchildren, Brock Foster, Makenzie Foster, Beau Foster, Adrianne Guymon, and Skylar Guymon. They were the love of his life. He was also survived by one sister, Freida (Pat) Allen of Morton, as well as many nieces and nephews who were very close to him and who he thought the world of.
He was preceded in death by his parents; four brothers, Ray Holliger, Sam Holliger, Clyde Holliger, and Bobby Holliger; and two sisters, Margaret Joos and Elsie Koch.
Louis served his country for two years in the U.S. Army.
He worked for Bob Grimm Chevrolet of Morton for 43 years, before retiring in 1995. He spent 20 years of retirement living in Cherokee Village, Ark., and enjoyed visiting family in Illinois. Louis loved to travel with his wife in their RV. Together, they enjoyed visiting places from the east to the west coast. There are only six states that they didn't have a chance to visit. Due to his ALS, he and his wife relocated back to the area in 2015, to be near family whom he loved.

Visitation will be from 4 to 7 p.m., on Thurs., Oct. 4, 2018, at Goodfield Apostolic Christian Church Fellowship Hall. A funeral service will be held at 11 a.m., on Fri., Oct. 5, also at the church fellowship hall, with ministers of the church officiating. Cremation rites will be accorded following the service. Burial will be held at a later date in Goodfield - Congerville Apostolic Christian Cemetery.

Memorials may be made to Greater Peoria Honor Flight, or to the ALS Foundation.

To send flowers to the family in memory of Louis Lee Holliger, please visit our flower store.