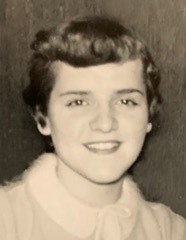 EAST PEORIA – On Sunday, December 6, 2020, Madeline Fulton, loving wife and mother of four children, passed away peacefully at the age of 84 at Apostolic Christian Restmor in Morton.   She suffered a long battle with progressive Parkinson’s disease and recently contracted COVID-19.
Madeline was born March 20, 1936, in Chicago, Ill., to Romano and Catherine Bordignon.  She attended Farmington Community High School and was a member of the band.   In 1958, she married Mario Saltarelli and had two children, Mario David and Marc Stephen.   The family resided in Rome, Italy for several years before moving back to Illinois where she worked as a secretary.
In 1973, Madeline married William Fulton of East Peoria, Ill.   William and Madeline raised two sons, Mario and Marc who attended East Peoria Community High School.   William has two children from a former marriage, Bill Fulton and Linda Fulton-Rohlman.
Madeline and Bill enjoyed many years of travel and enjoyed boating as members of the Detweiller Boat Club in Peoria.   Madeline enjoyed frequent trips to Los Angeles to visit her son, Marc, and his husband, Steve Masterson, where she enjoyed an escape from the harsh winters of Illinois.   She loved attending Marc’s screenings and special events.
Madeline was a sweet and loving soul for her entire life, always with a focus on family.  She was an expert accordion player whose musical mentor was Dick Cantino.   She taught accordion and was a long-time member of the Peoria Area Accordion Club and performed at many events over the years.    Her love of family and devotion to her husband and children always filled the home with warmth.   Nobody ever had a bad word to say about Madeline.
Madeline was preceded in death by her mother and father, Catherine and Romano Bordignon, and her brother Raymond Bordignon.    She is survived by her devoted husband William Fulton, 91, and her two sons, Marc Saltarelli, 58, a filmmaker and his husband Stephen Masterson, Dr. Mario Saltarelli, 60, biopharmaceutical executive and neurologist and his wife Dr. Mary Saltarelli, and her grandchildren Stephen Saltarelli, 30, an attorney/screenwriter, and Kathleen Saltarelli, (28), a wholistic healer, and stepchildren William Fulton, 64, Linda Rholman 67, and their extended family.  Madeline was a long-time member of St. Monica’s Catholic Church in East Peoria.
Madeline will be cremated at Knapp-Johnson Funeral Home and Cremation Center in Morton, Ill.  Due to Covid-19, a memorial is pending until Spring/Summer 2021 when it is anticipated to be safe to travel and gather to remember her life.  In lieu of flowers, donations in Madeline’s memory may be made to the Michael J Fox Foundation for Parkinson’s Research ( https://www.michaeljfox.org/donate )
Knapp-Johnson Funeral Home and Cremation Center in Morton is handling arrangements.
To leave an online condolence for the family, visit www.knappjohnson.com.

To send flowers to the family in memory of Madeline Fulton, please visit our flower store.