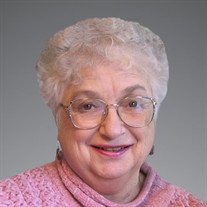 BLOOMINGTON - Margery Foster Desnoyers, 88, of East Peoria, Ill., formerly of Pekin, Ill., and Bloomington-Normal, Ill., passed away peacefully at 7:01 a.m. Wed., Jan. 23, 2019, at Aperion Care in Toluca, Ill., with her daughter by her side.
She was born Jan. 5, 1931, in Normal, Ill., the only daughter of C. Hayden and Zena (Orendorff) Foster. She was a 1949 graduate of University High School in Normal and attended Illinois Wesleyan University in Bloomington, where she was a member of the Sigma Kappa sorority. While at Wesleyan, she met her future husband, Thomas Desnoyers. They married March 22, 1952, at Second Presbyterian Church in Bloomington. He preceded her in death on May 16, 1977. She also was preceded in death by one son, Paul, in 1967; one daughter, Nan, in 1970; her son-in-law, Warren Wayne Bolt on Oct. 1, 2018; and one step-grandson, James Bolt in 2004.
Margery leaves to cherish her memory, her daughter, Aimee Bolt of East Peoria, Ill., three step-grandsons, Jeremy Bolt of Ballwin, Mo., Jonathan Bolt of Marquette Heights, Ill., and Joseph Bolt of Cedar Rapids, Iowa; one step-great-grandson, Shae Bolt of Huntsville, Ala., and many cousins.
Following her marriage, Margery traveled extensively with her husband abroad for his work and their pleasure. She joined him in Japan, where he was stationed with the United States Army, during the Korean War. Following his service, they made their homes in Lisle, Ill., Roanoke, Va., and McLean, Va., wherever his work took them. She then returned home to Illinois in 1988.
She worked many jobs in her lifetime and was last employed at University High School in Normal.
A special thank you goes out to the staff at Aperion Care Toluca for their exceptional care of Margery during her time there.
Cremation will be accorded. A graveside service for Margery, with burial of the cremated remains, will be held at a later date at Blooming Grove Cemetery (former Orendorff Cemetery) in rural Bloomington.
Knapp-Johnson Funeral Home and Cremation Center in Morton, Ill., is handling the arrangements.
In lieu of flowers, memorials may be made to the Cystic Fibrosis Foundation, Greater Illinois Peoria Office, P.O. Box 9206, Peoria, IL 61612 or to Tazewell Animal Protective Society, 100 Taps Lane, Pekin, IL 61554.
Online condolences may be sent to her daughter, Aimee, at www.knappjohnson.com.
To send flowers to the family in memory of Margery Foster Desnoyers, please visit our flower store.
Send a Sympathy Card