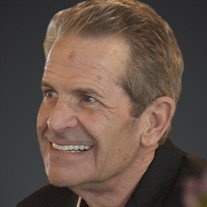 He was a member of Bethel Lutheran Church in Morton, where a funeral service will be held at 1 p.m. Saturday, April 21, 2018, with Pastor Jeff Anderson officiating.
Memorials may be made to Center for Prevention of Abuse, 720 W. Joan Ct., Peoria, IL 61614.

Knapp-Johnson Funeral Home and Cremation Center in Morton is handling arragements.
To send flowers to the family in memory of Michael L. Baynard, please visit our flower store.