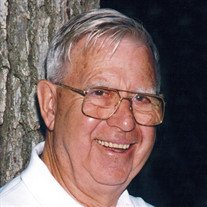 OSCAR S. BECKHAM, JR.
MORTON - Oscar S. Beckham, Jr., 90, of Morton, passed away Wed., May 9, 2018 at Snyder Village Health Center in Metamora, after a long struggle with Parkinson's Disease.
Oscar was born Sept. 16, 1927, in St. Louis, Mo. The beloved son of Oscar S Beckham, Sr. and Susan (Harris) Beckham, Oscar spent his childhood years in St. Louis and Cook Station, Mo.
On Sept. 28, 1944, at the age of 17, Oscar enlisted in the US Navy. He served most of his active duty on a Navy Liberty Ship the USS Chouree. As the war ended, he moved on to the Philippines and Tokyo Harbor, then home. After the war, he attended the Missouri School of Mines.
Oscar met his wife, Edith Carroll, while she was working in a cafe in Rolla, Mo. Soon after, they were married on July 9, 1949 and enjoyed 65 years together until Edith's passing in 2014.
He is survived by his children, Dan (Susan) Beckham, Elizabeth (the late Donald) Sheppard, and Kimberly (Steve) Neible, as well as seven grandchildren and four great-grandchildren.
Oscar began working at Caterpillar Inc. in July of 1948 and the couple moved to Illinois. After working for Caterpillar for 37 years, he retired from Caterpillar in 1985; he spent the majority of his career in Service Engineering. He was known as a "benchmark" engineer because he was all business when it came to making sure customers had trouble free experiences.
Oscar built or restored vintage cars, motorcycles and sailboats, as well as two new homes in which he and his family lived. He was a licensed amateur radio operator. Although he didn't fulfill his hopes of becoming a Navy aviator, he never lost his love of airplanes. During his lifetime, he owned and flew six airplanes. The last of these he built and flew at the age of 70 from Bloomington Illinois to central Florida where he and Edith owned a home in a "fly-in community."

Visitation will be from 5 to 7 p.m., Mon., May 14, at Knapp-Johnson Funeral Home and Cremation Center in Morton. Oscar was a member of Morton United Methodist Church where an additional visitation will take place, Tues., May 15, from 10 to 10:45 a.m., followed by a funeral service at 11 a.m., with Rev. Gabe Wanck officiating. Military funeral honors will be conducted by the United States Navy immediately following the funeral service.
Cremation rites will be accorded following service. Burial will be held at a later date at Hirstein Cemetery in Morton.

Memorials may be made to Shriners Hospital for Children.

To send flowers to the family in memory of Oscar S. Beckham, Jr., please visit our flower store.
Send a Sympathy Card