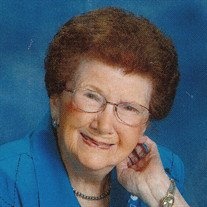 PAULINE F. HANDEGAN
MORTON - Pauline Frances (Collins) Saunders Handegan, 103, of Morton, passed away Wed., Feb. 14, 2018 at Apostolic Christian Restmor in Morton.
Pauline was born Aug. 19, 1914, in Duncan Mills, Ill. to Elmer and Della Mae (Barker) Collins. She married William D. "Bill" Saunders on Aug. 3, 1940 in Burlington, Iowa, who preceded her in death in 1962. She later married Leon Handegan on April 15, 1967 in Morton, who preceded her in death in 1994.
Pauline was also preceded in death by her sister, Helen Herman; five brothers, Clarence, Kimber "Kay", Raymond "Bud", Glen and Jack; nephew Jerry Collins; niece Rochelle Collins Miller; and grandson Shelby Saunders.
Surviving are two sons, Gary (Karen) Saunders of Virginia and Stephen Saunders of Texas; three grandchildren, Marcus, Cristina, and Billy Saunders; step-grandson, Kep LaSota; two great-grandchildren, William and Brooke Saunders. She is also survived by eight nephews, Ed Collins, Tom Herman, Terry Collins, Rick Collins, Jim Collins, Mike Collins, Bill Collins, Timothy Collins; and five nieces, Bonnie Hermann, Rosalind Cooper, Vickie Perry, Susan Collins and Kimberly Collins.
Pauline was raised on a farm in Fulton County where she tended to farm work and attended country schools. In her late teens she began working at Mitchell Sanitarium in Peoria, where she worked as an LPN for several years. While living and working in Peoria, she met and married her first husband Bill, a Caterpillar apprentice. They moved to Morton where their sons Gary and Steve were born. In 1954, the family moved to San Antonio, Texas and later moved to Aurora, Ill. in 1957, returning to Morton in 1962. Pauline worked at Witzig's and later worked for Caterpillar, retiring in 1981.
Pauline was fond of vacationing with her husband Leon, traveling to Hawaii and Europe and also enjoyed taking various bus trips with her friends.
Pauline was a devoted member of Morton United Methodist Church, where she spent many years attending bible study and Sunday worship. She enjoyed bowling, singing in the Women's Chorus, and was actively involved in the Morton Women's Club. She always looked forward to her monthly lunches with her former "Cat" girls and celebrating birthdays with the La-De-Das. She was always well groomed, dressed to impress, and was loved and admired by many who will miss her kindness, humor, compassion, wit, and candor.

Visitation will be held on Sat., Feb. 17, 2018 from 10 to 11 a.m. followed by a funeral service at 11 a.m., at Knapp-Johnson Funeral Home and Cremation Center in Morton, with Rev. Gabriel Wanck officiating. Burial will be at Hillcrest Memory Gardens in Morton.

In lieu of flowers, memorials may be made to the Morton United Methodist Church Building Fund.

To send flowers to the family in memory of Pauline F. Handegan, please visit our flower store.