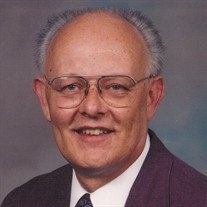 MORTON - Rev. Richard Benke, 82, of Morton, passed away Sunday, July 21, 2019 at OSF St. Francis Medical Center in Peoria.
Born on March 30, 1937 in Milwaukee, WI, Richard was the son of George and Venus (Moore) Benke. While preparing to become a pastor at Concordia Seminary in St. Louis, MO, Richard met Carlee Mutschink, a nurse in training at Lutheran School of Nursing. He and Carlee married on November 26, 1961 in New Braunfels, TX.
Richard is survived by his wife Carlee Benke of Morton; one daughter, Dawn (Joel) Conrad of Haymarket, VA; one son, Mark (Nicole) Benke of Katy, TX; four grandchildren, Kate Benke, Rick Benke, Joshua Conrad, Andrew Benke; one sister, Georgene Kerr of Castle Hayne, NC; and his mother-in-law Viola Mutschink of Katy, TX.
He was preceded in death by one son, Steven Benke.
Richard began his ministerial career in 1962. He was ordained as Assistant Pastor at Holy Cross Lutheran Church, Racine, WI, and also served as Head of the Religion Dept at Racine Lutheran High School. While at Racine LHS, he also coached football and girls basketball and became a guidance counselor.
In 1970, Richard moved his family to Maryland when he accepted a call to Baltimore Lutheran High School, again as Head of the Religion Dept. While there, he accepted the additional responsibilities of Girls Basketball Coach, fundraising to build a student activity center, and Dean of Students.
In 1980, he accepted a call to Concordia Seminary, St. Louis, MO, to serve as Director of Admissions and Ministerial Recruitment. Professor, Asst. Dean of Students, and Assistant Coach for basketball were further responsibilities he took on.
Pastor Benke returned to parish ministry in 1985 when called as Senior Pastor to St. John's Lutheran Church in East Moline, IL. Over his 10 years there, he supervised 9 vicars from the seminary and joined the Civil Air Patrol, where he achieved the rank of Major. His extensive work in local hospitals led to an invitation to train other pastors how to handle emergencies.
Pastor Benke began serving at his final parish in 1995 at Bethel Lutheran Church. A stroke forced him to retire early in March 2002, after which he did vacancy preaching in area congregations, coached 3 seasons of basketball at Bethel Lutheran School, and served as school librarian for 3 years.
Upon moving to a newly-built assisted living center, he was elected to serve as the first president of the Resident Council and was serving a second term when his health forced him to step down.
Richard (aka Rich, Dick, Dad, Pastor) will be remembered as a devoted son; loving husband and spiritual leader of his family; caring, involved, and wise father; natural leader; gifted preacher, teacher, and mentor; and a lifelong learner. His personal enjoyments included avid reading, playing cards and board games, playing and teaching chess, and being a loyal Green Bay Packers fan. He was trying his hand at painting when his health decline accelerated.
Visitation will be Monday, July 29, 2019, from 5-7 p.m., at Bethel Lutheran Church in Morton. A memorial service will be held at the church on Tuesday, July 30, 2019 at 10:30 a.m., with Rev. Jeff Anderson officiating.
Memorials may be made to Bethel Lutheran Church in Morton or Concordia Seminary in St. Louis, MO.
To leave an online condolence for the family, visit www.knappjohnson.com.

To send flowers to the family in memory of Richard Benke, please visit our flower store.