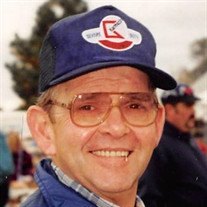 DEER CREEK - Richard L. Carr, 77, of Arizona, formerly of Deer Creek, passed away Monday, July 16, 2018, due to complications from surgery with his wife, daughter and niece by his side. Richard was born November 24, 1940, to Ross and Violet (Rainey) Carr. He married Joan L. Pate. She preceded him in death. He then married Dorothy Rupsoff.
Surviving are his wife, Dorothy Carr; son, Michael Carr; granddaughters, Taylor and Meghan Carr; step-daughters, Peggy (Russ) Sloat and Lucy (Joshua) Oppenheimer; step-grandsons, Dennis (Millie) Briner, Steven (Kelly) Briner and Scott Briner; step-granddaughters, Olivia and Judana Oppenheimer; 13 great-grandchildren; and 2 great-great grandchildren; and many nieces and nephews, a few very close to his heart, Nephew Tim and Nieces Pat and Linda.
Richard was preceded in death by one son, Gerald Carr; two brothers, Charles and John Carr; and sister, Eleanor Simmons.
He graduated from Jacksonville School of the deaf. Richard then attended barber school and opened his own shop in Hudson. When long hair came in style, Richard closed his shop and went to work at Caterpillar until he retired in 2002.
He and wife Dorothy "Dot" left Deer Creek and moved north to DeKalb, IL. Later they moved to Rockford, IL and eventually moved to Arizona, where they enjoyed the company of their many friends.
He was a dedicated Chicago Cubs fan. He will be sorely missed.
A private family service where he will be interned next to Joan, as he requested, will be held at Mt. Zion Cemetery in Deer Creek, Ill.
To send flowers to the family in memory of Richard L. Carr, please visit our flower store.
Send a Sympathy Card