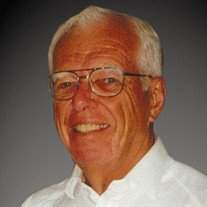 MORTON - Richard W. Kizer, 91, of Morton, passed away Friday, Nov. 16, 2018, at his home.
He was born Oct. 8, 1927, in Paris, Ill., to Raymond and Bertha (Wright) Kizer. He married Nancy Thompson in June of 1951. She preceded him in death in June of 2007. He was also preceded in death by one sister, Jean Blake.
Surviving are one son, Timothy (Carolu) Kizer of Morton; one daughter, Patricia (Steve) Munson of Morton; five grandchildren, Katie Smith, Hope Scheffler, Molly Munson, Grace Pflederer and Ashley Wraight; and five great grandchildren.
Richard is a United States Army veteran having served during the Korean War.
He was a 1945 graduate of Paris High School and a 1951 graduate of the University of Illinois with a degree in mechanical engineering.
Richard was an engineer for Caterpillar. He last worked at the Pioneer Park Tire Development as a division manager, retiring in 1984 after 33 years of service.
Richard was a member of the Masonic Lodge and Central Illinois Banjo Club. He was a past member of the Morton Lions Club and a member of the World Karting Association for 40 years, where he assisted his son in his racing career. Richard was also a former member of Morton United Methodist Church. He was an avid golfer. He enjoyed wintering in Florida, where he was a member of the Gulf Coast Banjo Society.
Cremation rites have been accorded. A private service with military honors will be held at a later date.
Knapp-Johnson Funeral Home and Cremation Center in Morton is handling the arrangements.

Memorials may be made to National Parkinson's Association in Miami, FL.
To send flowers to the family in memory of Richard W. Kizer, please visit our flower store.