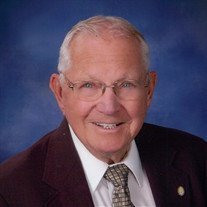 RICHARD N. MILLER
MORTON - Richard N. "Dick" Miller, 92, of Morton, passed away Tues., June 27, 2017, at his residence.
Dick was born Jan. 9, 1925, in Cleveland, Ohio, to John and Otilia (Kolacinski) Miller. He married Ann Prelogar on April 11, 1959 in Cleveland. Ann preceded him in death on Oct. 6, 2008. He was also preceded in death by one sister, Ruth Franek.
Dick is survived by three sons, Bob (Nikki) Miller of Morton, Dave Miller of Palatine, Ill., and Tom (Pam Marmol) Miller of Bartlett, Ill.; three grandchildren, Ryan Miller of Morton, Blake Miller of Macomb, and Brett (Lexy) Miller of Morton; and two great-grandchildren, Hudson and Beckett Miller. He is also survived by one sister, Doris Kubinski of Broadview Heights, Ohio.
Dick is a 1942 graduate of Garfield Heights High School in Ohio. In 1943, he joined the U.S. Coast Guard and served until 1946. While in the Coast Guard, much of his time was spent in the South Pacific, where he eventually landed in the Philippine Islands.
After his service from the Coast Guard, Dick attended Cleveland College. After college, he worked in various industries. Dick was employed at Towmotor Co., in Mentor, Ohio, where he worked as a Lift Truck Manufacturer. He later worked in Service Engineering and eventually became an Editor in Service Publications. In 1972, when Caterpillar, Inc. purchased Towmotor Co., he and his family relocated to Peoria. His children attended Blessed Sacrament Catholic School in Morton, while his family attended and later became members of Blessed Sacrament Catholic Church.
Dick enjoyed volunteering his time with Cursillo Hospice Care and the Soup Kitchen with the Sisters of Charity. He also volunteered, for 27 years, at Proctor Hospital in Peoria.

A Prayer Service will be held at 4:30 p.m., followed by a visitation from 5 to 7 p.m., on Sunday, July 2, 2017 at Knapp-Johnson Funeral Home in Morton. Further visitation will be held from 9-9:45 a.m. on Monday, July 3, at Blessed Sacrament Catholic Church in Morton, with a funeral Mass following at 10 a.m. Msgr. Gerald Ward will officiate. Burial will be at Hirstein Cemetery in Morton.

Memorials may be made to a charity of the donor's choice.

To send flowers to the family in memory of Richard N. Miller, please visit our flower store.
Send a Sympathy Card