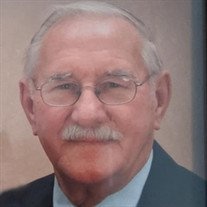 Morton - Richard N. "Dick" Ruffini, 92, of Morton, Ill., passed away Monday, March 30, 2020, at OSF St. Francis, Peoria, Ill.
Richard was born December 29, 1927, in Hamtramck, Mich., the first born son of Richard and Bernice (Valatka) Ruffini. He married Marjorie A. Thompson on October 21, 1950 in Detroit, Mich. She preceded him in death on June 3, 2016. He was also preceded in death by his parents and two brothers, Robert Ruffini and Ralph Ruffini.
He is survived by four children, Richard J. (Kris) Ruffini of Grand Rapids, Mich., Susan G. Stein of Peoria, Ill., Cathy A. Meiners of Morton, Ill., and Ronald P. Ruffini, Menasha of Wisc.; four grandchildren, Brian (Lauren Schultz) Meiners, Ryan Ruffini, Kevin Meiners, and Jennifer Stein.
He worked as a Drafting Engineer at Henry Pratt in Dixon, Ill, and retired from W.A. Whitney, Rockford, Ill.
Richard was a World War II veteran in the U. S. Army. He was able to participate in the WWII memorial ceremony in Washington, D.C. Richard was a member of the Morton, Ill. American Legion and was instrumental in the conception and design of the Veteran's Memorial Park, located in Morton.
He enjoyed golfing, watching Michigan and Michigan State football, and spending time working in his yard. He will be sadly missed by his family.

A private graveside service will be held at White Chapel Memorial Cemetery in Troy, MI.

Knapp-Johnson Funeral Home in Morton, and A.J. Desmond Funeral Home in Troy, Mich. are handling the arrangements.
To send flowers to the family in memory of Richard N. Ruffini, please visit our flower store.
Send a Sympathy Card