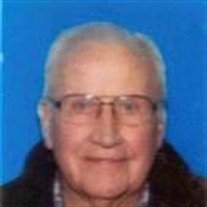 ROBERT C. BAURER
MORTON - Robert C. "Bob" Baurer, 90, of Morton, passed away Mon. Aug. 28, 2017 at UnityPoint Health - Methodist in Peoria.
Bob was born March 4, 1927, in Peoria, to William and Elsie (Papenhaus) Baurer.
Surviving are two nephews, James (Phyllis) Baurer of Murray, Ky., and Kenneth (Sandy) Baurer of Mackinaw, Ill.; and one niece, Barbara Baurer (Randy Rogers) of Minier, Ill. He is also survived by four great-nieces and nephews and four great-great-nieces and nephews.
He was preceded in death by his brother, William Baurer, Jr.
Bob is a United States Army veteran having served from 1950 to 1952.
From 1954 to 1984, he worked as an Accountant for General Electric. After retiring from General Electric, he farmed in the Deer Creek - Morton area.
Bob was a sports fanatic who was especially a big supporter of the Bradley Braves, Chicago Bears, and University of Illinois athletics. He knew everything there was to know about IHSA boys' basketball. Bob was an avid reader who also loved to travel the backroads of Illinois and learn about local Illinois history.

Cremation rites have been accorded.
A private memorial service will be held Thurs., Aug. 31, 2017 at Knapp-Johnson Funeral Home and Cremation Center in Morton. Burial will be held at a later date at Hillcrest Memorial Gardens in Morton.

Memorials may be made to the Morton American Legion Post 318.
To send flowers to the family in memory of Robert C. "Bob" Baurer, please visit our flower store.
Send a Sympathy Card