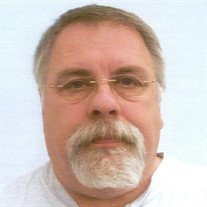 MORTON - Robert E. "Bob" Paulsell, II, 68, of Morton, passed away on Monday, July 15, 2019, at OSF St. Francis Medical Center Emergency Room, in Peoria.
Bob was born on August 31, 1950, in Waynesville, Mo., to Robert and Thelma (Vance) Paulsell. He married Rita Ryals on July 16, 1972, in Morton.
Surviving are his wife, Rita of Morton; two daughters, Barbara (Shannon) Catton of Pekin, and Cheryl (Jason) Davidson of Ozark, Mo.; his father, Robert Paulsell of Tremont; seven grandchildren, Jayci, Bobbi, and Kaleb Davidson, and Tyler, Rylee, Shyenna, and Madyson Catton; and one sister, Barb (Glenn) Goggins of Morton.
He was preceded in death by his mother, Thelma Paulsell.
Bob was an Army veteran, having served in Vietnam. He first worked at Caterpillar, Inc. in Morton, Parts Department for 20 years. He then began working as a self-employed woodworker and house builder. He later went to work for MBS in Tremont, where he worked for the next 18 years, retiring in 2015. Since retirement, Bob had continued to work for them part-time, now known as Crossroads Building Supply.
Cremation rites have been accorded. A Celebration of Life service will be held at a later date.
Memorials may be made to Illinois Neurological Institute; checks made payable to INI Neurology. Mail to: INI Neurology, Attn: Lanna Scannell, 200 E. Pennsylvania Ave., Peoria, IL 61603.
To send flowers to the family in memory of Robert E. "Bob" Paulsell,, please visit our flower store.