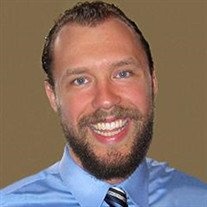 SAMUEL E. MITCHELL
PEORIA - Samuel Elliot "Sam" Mitchell, 27, of Tucson Ariz., formerly of Peoria, passed from this life on Tues, Oct. 3, 2017. Sam was born on Jan. 6, 1990 at the Naval Medical Center, San Diego, Calif.
Sam is survived by his parents, Jennifer Class-Mitchell and Dr. Craig Mitchell of Peoria, his sister, Greta (Mitchell) Kazenski, brother-in-law Robb Kazenski, and niece Reya Kazenski, all of Philadelphia, Penn. He is also survived by his paternal grandmother, Winifred Mitchell of Kingsland, Texas as well as numerous aunts, uncles, and cousins.
In 2008, Sam graduated with academic honors from the International Baccalaureate program at Richwoods High School in Peoria. While attending Richwood's, he was a 4-year varsity swimmer as well as a cross-country runner during his freshman and sophomore years. He was swim team captain and earned the hardest-worker award during both his junior and senior years. During high school, he participated in many plays. He played saxophone in the school orchestra and was a solid pianist who played briefly with the Peoria Jazz All-Stars.
Sam went on to attend Illinois Wesleyan University and graduated in 2013 with degrees in both political science and accounting. While there, he earned 4 varsity letters in swimming. He was an academic all-conference swimmer and was student body vice-president for one term. He spent a summer abroad at the University of Edinburgh in Scotland.
Sam was an accomplished triathlete, winning or placing in his age group in numerous triathlons, including the Transamerica Chicago triathlon. He finished Ironman Louisville in 2013. He was a rock-climbing enthusiast.
He had the courage to put himself in uncomfortable situations for personal growth. While working as a camp counselor at Deer Valley YMCA summer camp, he loved the camaraderie and closeness of the staff and campers. Sam valued healthy food and locally grown produce; he spent 6 months traveling from Illinois to Washington state working with Worldwide Opportunities on Organic Farms (WWOOF).
He looked for ways to help and connect with his community. He fought for social justice by calling and writing his local and state political officials. Recently, his most personally fulfilling activity was volunteering at a local Tucson, Ariz. hospital. His bicycle was his main mode of transportation.
Sam was an honest and sensitive, yet strong, young man who was insistent on making his own way in the world. He was kind, gentle, and often felt the weight of the world on his shoulders. He liked playing chess and loved animals. He loved the company of friends and family, and valued love and kindness. He cherished long phone conversations. He was handsome, had a wonderful smile and was loved and adored by his parents and extended family. He will be missed.

An outdoor celebration of his life will take place at 11 am on Saturday Oct. 14, 2017 at Robinson Park pavilion in Peoria, IL. A luncheon will follow. Casual attire.

In lieu of flowers, memorials may be made to National Alliance on Mental Illness (NAMI) in Sam's name.

To send flowers to the family in memory of Samuel E. Mitchell, please visit our flower store.
Send a Sympathy Card