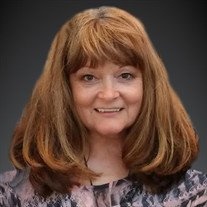 MORTON - Sandra K. "Sandy" Sams, 68, of Morton, Ill. and Harlan, Iowa, passed away Wednesday, December 18, 2019, at her residence in Morton. She was born July 16, 1951, to Raymond and Wynne (Nooner) Smith-Johnson. She married Craig Sams on November 20, 2003, in Harlan, Iowa
Surviving are her husband, Craig of Harlan, Iowa; one son, Ken (Jackie) Bruening of Omaha, Neb.; two grandchildren, Quinn and Lucy; five sisters, Shari Wiese of Morton, Ill., Brenda Cox of Canton, Ill., Delaine (Richard) Gamble of Chillicothe, Ill., Cynthia Oakes of Bloomington, Ill., and Alice (Alan) Langley of Indianola, Iowa; and one brother, Terry Smith of Bloomington, Ill.
She was preceded in death by both parents and one brother-in-law, Randy Wiese.
She was a flight attendant for 25 years for Continental Airlines, before flying her final 10 years with Frontier Airlines.
Sandy enjoyed spending time with her family, especially her grandchildren. She loved playing card games and was quick to tell a joke. Sandy was a loving person who always took care of those around her. Even during Sandy's most difficult times, she never complained and focused her attention on others.
Cremation rites have been accorded.

A memorial service will be held at 4 p.m. Saturday, December 21, 2019, at Knapp-Johnson Funeral Home and Cremation Center in Morton.

Memorials may be made to the American Cancer Society.

To send flowers to the family in memory of Sandra K. "Sandy" Sams, please visit our flower store.