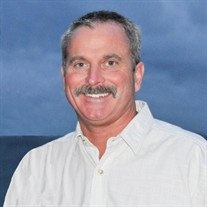 MORTON - Scott C. Burroughs, 54, of Morton, Illinois and Columbus, Nebraska, returned to his heavenly home on Sunday, May 3, 2020, after a courageous battle with cancer. His devotion to his family and his firm belief in God supported him in his struggle and ultimately gave him peace.
Scott was born on February 22, 1966, in Peoria, Illinois to Calvin and Diana (Rein) Burroughs. He married Sheila Ragland in 1990 in Morton, and together they had two daughters. Scott's early career brought him to Des Moines and eventually, Columbus, NE, where he later married Wendy Mullinix in 2016.
Scott attended Illinois Central College where he obtained an Associates degree in Agriculture Business Management. He then graduated from Iowa State University with a Bachelor's degree in Animal Science. He worked at the National Pork Producers Council in Des Moines, Iowa before moving to Nebraska to join Danbred North America in 1995. Nebraska Pork Partners (NPP) was formed in 2004, with Scott being a general partner and COO. In 2010, Scott returned to the family farm in central Illinois to become the fifth generation of Burroughs Farms. Most recently, Scott also owned and managed a precision agriculture business, Bottom Line Solutions, LLC.
Scott was an active member of the Milford Volunteer Fire & Rescue Department in Milford, Nebraska for 15 years. During this time, he helped train new EMT's, was instrumental in obtaining grants, and held the position of the Assistant Rescue Chief.
He built his career around his passion for agriculture and helping people, which was exemplified through his personal life. Scott enjoyed shooting sporting clays, hunting, hiking, and traveling. He had mastered the Traeger grill and you could always count on a source of protein at every meal. Scott also enjoyed coaching his girls' softball teams through the years, and most recently, he enjoyed spending quality time with his kids and grandkids.
Scott is survived by his wife, Wendy Burroughs of Morton; two daughters, Chloe (Brock) Blankenship of Lincoln, Nebraska and Cayle (Taylor) Klein of Tekamah, Nebraska; one stepdaughter, Bailey Hoadley of Denver, Colorado; one stepson, Caleb Hoadley of Columbus, Nebraska; two grandchildren, Titus and Asher Blankenship; his parents, Calvin and Diana Burroughs of Morton; one sister, Melissa (Kevin) Mohr of Hopedale, Illinois and one brother, Kurt Burroughs of Morton.

Private family visitation and funeral service will take place at Knapp-Johnson Funeral Home and Cremation Center in Morton. Burial will be at Hirstein Cemetery in Morton. A celebration of life will be held at a later date in both Morton, Illinois and Milford, Nebraska.

Memorials may be made to the Milford Volunteer Fire Department in Milford, Nebraska or to the St. Jude Runners' Association.

To view Scott's video tribute or to leave an online condolence for the family, please visit www.knappjohnson.com.
To send flowers to the family in memory of Scott C. Burroughs, please visit our flower store.