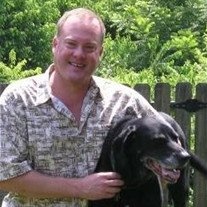 MARYLAND HEIGHTS, MO. - Scott Harper Pinkerton, 55, of Maryland Heights, Mo., formerly of Morton, passed away Sun., Dec. 16, 2018, at Parkwood Skilled Nursing Home and Rehabilitation in Maryland Heights, Mo.
Scott was born April 26, 1963, in Peoria, to Robert L. and Phyllis (Harper) Pinkerton. Phyllis preceded Scott in death on Oct. 22, 1996.
Surviving are is his father, of Morton; his beloved, Katie and her son, Rylan, of Maryland Heights, Mo.; and his black Labrador, Sammy. He is also survived by his Aunt Betty, Uncle Terry, Aunt Jan, Uncle Bill; and cousins, Lisa and Jim, Meredith and Steve, Alicia and Russ.
Scott was a 1981 graduate of Morton High School. He attended Iowa State University, where he earned a bachelor's degree in Industrial Engineering in 1986 and was a member of the Adelante Fraternity. He later earned a master's degree in Business Administration in 1992 from St. Louis University.
Scott worked as a sales engineer for Northern Telecom. He also held numerous positions at McDonnell Douglas working on the Goshawk and F-15.
Scott was a Master Mason and a member of the Moolah Shrine in St Louis, Mo. As a Shriner, he was a member of the Ceremonial Cast and volunteered at the annual St. Patrick's Day Parade in St. Louis.
Scott was an avid fan of Jimmy Buffett. He enjoyed grilling and became a trained member of the Kansas City Barbeque Society so he could judge cooking contests. Scott loved meteorology and became certified by the St. Louis County Police Department in severe weather observation. He especially enjoyed boating at Lake of the Ozarks.
Scott was much loved by his family and friends and will be dearly missed.

A visitation will be held from 9 to 10:30 a.m., Thurs., Dec. 20, 2018, at Knapp-Johnson Funeral Home and Cremation Center in Morton. A funeral service will follow at 10:30 a.m., with Pastor Doug Habegger officiating. A graveside service will take place at 2:30 p.m., on Thursday, at Pulliam Cemetery in Modesto, IL.

In lieu of flowers, memorials may be made to the Shriner Hospital by calling Janet Klein 314-872-8330, or directly through their website at https://lovetotherescue.org/.

To send flowers to the family in memory of Scott H. Pinkerton, please visit our flower store.
Send a Sympathy Card