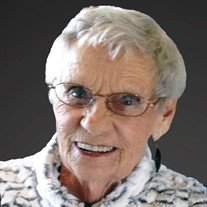 SHIRLEY WEST
MORTON - Shirley A. West, 87, of Morton, passed away Wednesday, December 13, 2017, at OSF St. Francis Medical Center in Peoria.
Shirley was born June 1, 1930, in Belle Plaine, Minn., to Harold and Marie (Bray) Madden. She married Jack West on Oct. 18, 1950, in Walker, Minn. He preceded her in death on March 14, 2011. She was also preceded in death by two daughters, Connie White in 1981 and Christine Coyne in 2016; and four brothers. Surviving are two daughters, Kim (Dennis) Erickson of Springfield, Ill. and Karen (Gary) Dausmann of Poplar Bluff, Mo., seven grandchildren; eight great grandchildren; and five great-great grandchildren.
Shirley worked for Rocke's Meating Haus in Morton for 18 years, until retiring in 1987.
She was a member of Blessed Sacrament Catholic Church in Morton, where a visitation will be held Monday, Dec. 18, 2017, from 10:30 to 11:15a.m. A funeral mass will follow at 11:30 a.m. at the church, with Msgr. Gerald Ward officiating. Burial will be held at a later date in Hirstein Cemetery in Morton.
Cremation rites will be accorded following services.

Memorials may be made to JDRF Diabetes.

To send flowers to the family in memory of Shirley A. West, please visit our flower store.