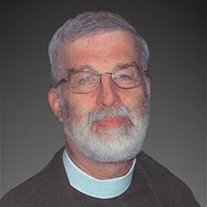 PEORIA - The Rev. Paul S. Park, 68, of Peoria, formerly of Morton, passed away on Sunday, December 29, 2019, at OSF St. Francis Medical Center in Peoria, from long-term complications following cancer.
He was born on October 15, 1951, in Rockford, Ill., to Richard and Ruth (Ehmen) Park.
He is survived by his wife of 44 years, Rosalie "Rosy" (DeWall) Park, who he met while teaching at the Mt. Morris School District. They married in Forreston, Ill. on June 7, 1975.
Also surviving are one sister, Claudia (Joel) Guenther of Littleton, Colo.; two sisters-in-law, Colleen (Larry) Dikkers and Jean (the late Neil) DeWall, both of Baileyville, Ill.; one nephew, Joel (Kelly) DeWall of Johnson Creek, Wisc.; five nieces, Anne (Mike) Wisniewski of Hoffman Estates, Ill., Krista (Kurt) Butler of Machesney Park, Ill., Sarah (the late Tim) Walker of Barrington, Ill., Stacie (Chuck) Williar of Sycamore, Ill., and Carol (Wayne) Jackowski of German Valley, Ill.; and many great-nieces and great-nephews.
He was preceded in death by his parents and one brother-in-law, Neil DeWall.
Pastor Paul received his Bachelor's degree in Asian Studies and History Education from Augustana College in Rock Island, Ill., Master's degree in Special Education from Northern Illinois University in DeKalb, Ill., and Master of Divinity from the Lutheran Theological Seminary at Gettysburg, Penn.
Prior to meeting his wife Rosy, Pastor Paul traveled to India, Thailand, and Japan. His Asian experiences were unique in that he served in the Christian Mission Field in India, was involved in Agriculture in Japan, and was an Ordained Theravadin Buddhist Monk in Thailand.
During his 35 years in Peoria, Pastor Paul served as a chaplain at OSF St. Francis Medical Center and was the former Director of Spiritual Care at Lutheran Hillside Village. After completing his advanced units of Clinical Pastoral Education at Methodist Medical Center, Pastor Paul went on to become a Fellow in what is now known as the Association of Professional Chaplains.
Pastor Paul was an ELCA pastor, serving as an Interim Minister at churches across Illinois, including Maryville, Springfield, Macomb, Decatur, Canton, and most recently, at Trinity Lutheran Church in Golden, Ill.
Pastor Paul's ministry was extremely important to him and was his true passion in life. He was incredibly generous with his time and spent many countless hours visiting and praying with those who were sick or hospitalized, consoling those who were grieving, counseling those in need, and officiating many weddings and baptisms. Through it all, he influenced and touched the lives of so many. He will be greatly missed by the love of his life, Rosy, and many others.
Cremation rites have been accorded. Visitation for Pastor Paul will begin at 3 p.m. on Friday, January 10, 2020, at Salem Lutheran Church in Peoria. At 6 p.m., a Celebration of Life service will be held, with Pastor Craig Swenson officiating. A graveside burial of cremated remains will be at 11 a.m. on Saturday, January 11, 2020, at White Oak Cemetery in Forreston, Ill. A luncheon will follow at Forreston Reformed Church.
Memorials may be made to Salem Lutheran Church in Peoria, Forreston Reformed Church in Forreston, Ill., or St. Jude Children's Research Hospital.
Knapp-Johnson Funeral Home and Cremation Center in Morton is handling arrangements.
To leave an online condolence for the family, visit www.knappjohnson.com

To send flowers to the family in memory of The Rev. Paul S. Park, please visit our flower store.
Send a Sympathy Card